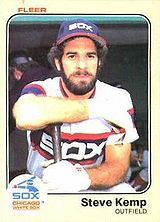 Steve Kemp played eleven years in the majors with a career OPS+ of 119. In his best year, 1979, he made the All-Star team.

He attended Arcadia High School in southern California and played baseball there. Although not drafted out of high school, Kemp attended the University of Southern California and became the #1 overall pick in the January 1976 amateur draft, by the Detroit Tigers. He won the Gold Medal with the USA in the 1974 Amateur World Series and the Silver Medal in the 1975 Pan American Games. Kemp was at USC at the same time as Roy Smalley and Rich Dauer, among other future major leaguers.

Steve spent only one year in the minors before coming up to the big leagues. In 1976 he hit .289 in half a season with the Montgomery Rebels and then .386 with a .696 Slugging percentage when moved up to the AAA Evansville Triplets. In 1977 he was a major league regular with the Tigers, driving in 88 runs.

Moving to the Chicago White Sox in 1982, he drove in 98 runs for them, third on the team behind Harold Baines and Greg Luzinski as the team won 87 games.

In 1983 and 1984 he played for the New York Yankees; the team won 91 games the first season and 87 the second season. In 1985 and part of 1986 he was with the Pittsburgh Pirates. His major league career was shortened when he was hit in the eye by a pitch.

In 1989, he played for the St. Petersburg Pelicans of the Senior Professional Baseball Association. He hit .329 in 60 games with the club.

Two of the most similar players to Kemp are his contemporaries Sixto Lezcano and Mel Hall.

He made one observer's All Steve Team.