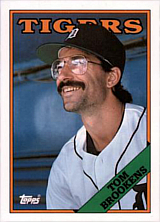 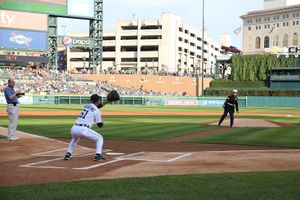 Brookens catches a pitch thrown by a Marine in 2013

Mustache man Tom Brookens was a versatile and dependable big league third baseman, holding down the hot corner for nearly a decade with the Detroit Tigers. He was a fan favorite in the Motor City, always giving 100 percent, and a valuable component of the 1984 World Champion squad, roaming all over the diamond that year. On August 20, 1980, he had his finest day in the bigs, going 5-for-5 with a home run, a triple, two RBI and taking the lead in a 5-4-3 triple play as Detroit triumphed, 8-6, over the Milwaukee Brewers. All good things must end, and Brookens was moved to the New York Yankees after the acquisition of "Downtown" Chris Brown for 1989, finishing his career as a bit player with the Cleveland Indians in 1990.

Tom reunited with the Tigers following his playing days, coaching his way through their minor league system. He was first base coach from 2010 until 2013. He was considered the heir apparent to Jim Leyland as coach until Leyland retired as manager following the 2013 season, but the job went to a more handsome candidate, former Tigers catcher Brad Ausmus, instead.

His cousin, Ike, pitched for the Tigers in 1975, and his twin brother, Tim, was a minor league infielder and outfielder in the Tigers and Texas Rangers chains from 1975 to 1978.