Note: This page discusses 1980s infielder Chris Brown. For others with the same name click here. 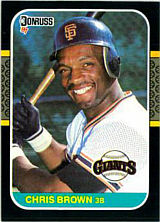 “When you’re on top of the mountain, everybody wants you. When you start to come down, nobody wants to know you. That’s the way it is.” - Chris Brown, to Mitch Albom, Detroit Free Press, March 12, 1989

Chris Brown appeared headed for stardom early in his big league career but was slowed by injuries and died tragically at age 45.

Brown was a high school teammate of Darryl Strawberry at Crenshaw High School in L.A. and was selected by the San Francisco Giants in the second round of the 1979 amateur draft. Primarily a third baseman, he hit between .265 and .293 in the minors from 1979 to 1984, except for one season at .237. He showed moderate power, with 5 to 10 home runs per year.

Brown reached the majors with the Giants in 1984 and was named to the Topps All-Star Rookie Team in 1985, when he led National League third basemen in fielding percentage with a .971 mark. He followed that by making the National League All-Star Team in 1986 thanks to a sparkling .317 batting average. The Win Shares method suggests that he tied with Chili Davis as the Giants' MVP in 1985, and was their third most valuable player in 1986. Things began to go downhill in 1987, when he was hampered by a number of injuries, including a sore wrist; questions were raised about how serious the injuries really were, as by then he had begun to develop a reputation as a malingerer after playing in only 116 games in his stellar 1986 season. His knack for getting hit by pitches - he led the NL with 11 in 1985, and finished in the top 10 the following two seasons despite limited playing time - no doubt contributed to his constant string of injuries. The Giants were about to enter a rebuilding phase: Brown's main teammates were Chili Davis, Bob Brenly, Mike Krukow, Scott Garrelts, Dan Gladden and Jose Uribe.

On July 5, 1987, Brown was traded to the San Diego Padres as part of a major deal which brought Kevin Mitchell and Dave Dravecky to the Giants. He had only played 38 games up to that point with a .242 average. With his new team, he continued to slide, batting .232 in 44 games with only 3 home runs. He only played 80 games in 1988, hitting two home runs with a .235 average and then was traded to the Detroit Tigers after the season. Despite optimistic talk from new manager Sparky Anderson that he would turn things around and return to his All-Star ways, he hit for less than .200 in 17 games for the 1989 Tigers and was released on May 19th.

After he retired, Brown drove a truck for Halliburton in Iraq. He died in December 2006 after returning to the United States, one month after suffering serious burns in a suspicious house fire.