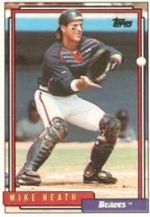 Mike Heath was a better than average catcher, as evidenced by 14 major league seasons. A very capable receiver with a decent bat and a good throwing arm, Heath had his best seasons with the Detroit Tigers (where he spent five of the last six years of his career).