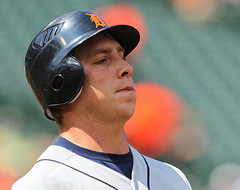 Outfielder Andy Dirks made it to the majors in 2011.

Dirks played baseball, football and basketball in high school. He struck out 20 batters one game in high school and was All-State three times. As a freshman in junior college, he hit .341 with 19 steals. He also saved four games and had a 3.45 ERA. Hutchinson made the Junior College World Series. That summer, he hit .301 with 34 steals for the Fayetteville Swampdogs. In 2006, the sophomore improved to .415 with 11 home runs and 30 steals; he was 1-0 with a save and a 4.85 ERA on the mound. That summer, he batted .308 with 34 steals for the Brainerd Blue Thunder.

Transferring to Wichita State University, Dirks hit .320 and stole 19 bases. He returned to the Blue Thunder and set a Northwoods League record by reaching base 52 straight games (the old mark was 50, set in 1995). He hit .347 with 29 steals for the summer and made the league All-Star team. In 2008, the senior outfielder improved to .388 with 84 runs and 26 steals. He was All-Missouri Valley Conference and tied Chris Shehan for fifth in NCAA Division I in runs, behind Erik Wetzel, Gordon Beckham, Buster Posey and Brett Wallace. He was selected by the Detroit Tigers in the eighth round of the 2008 amateur draft; Chris Wimmer was the scout.

The Kansas native was better in his second try with Erie, producing at a .278/.342/.425 rate, stealing 19 bases while being caught 4 times and delivering 11 home runs. He dazzled on defense, leading Eastern League outfielders with 16 assists and tying Adam Loewen for the lead with five double plays. Promoted to the Toledo Mud Hens, he tore up AAA for the final month of the year - .375/.398/.648, 17 RBI in 22 G. Baseball America rated him the best defensive outfielder in the Detroit chain and the Tigers' #11 prospect overall.

In the winter of 2010-2011, he starred for the Toros del Este, hitting .315/.372/.533. He finished third in the Dominican League in average (behind Hector Luna and Juan Francisco), led in triples (7), was second in total bases (88, one behind Luna), tied for second with 52 hits, was third in slugging (behind Francisco and Jeff Frazier), tied for third in RBI (26, even with Matt McBride) and was 4th in runs. He helped the Toros win their second title. He did not appear in the 2011 Caribbean Series.

Andy made his big league debut with the Tigers in 2011. He hit second and played left field in his debut, hitting between fellow outfielders Austin Jackson and Brennan Boesch. Dirks drew a walk from Kyle Drabek of the Toronto Blue Jays in his first MLB plate appearance. He singled in the third, then flew out in the 5th. When lefty Marc Rzepczynski relieved Drabek in the 8th, Ryan Raburn pinch-hit for Dirks. Overall, he hit .251/.296/.406 for a 90 OPS+ in 78 games, with 13 doubles and 7 homers in 219 at-bats, rotating between all three outfield slots. He did not play in the ALDS as the Tigers upset the New York Yankees, but went 1 for 5 with a run and a stolen base in their loss to the Texas Rangers in the 2011 ALCS.

Returning to the Dominican Republic after the season, Dirks had a mediocre regular season (.262/.294/.385) for the Toros. He moved to the Leones del Escogido after the season and was one the key contributors to their winning the 2012 Caribbean Series. He drove in the winning run in the 9th game of the Dominican League finals to give Escogido the league title, then in the Series drove in the winning run in extra innings in one of the games, and made a spectacular catch in right field to save a 1-0 win in another contest. Dirks made the Tigers' opening day roster in 2012 and started the year red hot, getting 6 hits in his first four games; he played only intermittently that month, but was an everyday starter in May and a big contributor to the offense, as he had his first four-hit game on May 10th and ended the month hitting .328. However, that month ended on a bad note as he sustained an Achilles tendon injury on May 30th and was out until early August, with a ten-game rehabilitation stint in Toledo in between. He continued to hit very well while back as an everyday player in August and September, and finished the year with a solid .322 batting average, coupled with an OBP of .370 and a .487 slugging percentage in 88 games as the Tigers' most-used left fielder. He hit 18 doubles, 5 triples and 8 homers, scored 56 runs and drove in 35. he went 5 for 17 (.294) with a double in the Tigers first-round win over the Oakland A's in the ALDS, although he neither scored nor drove in a run. He was 4 for 18 (.222) with another double in the four-game sweep of the New York Yankees in the ALCS. Because the DH was not in use in the first two games of the 2012 World Series against the San Francisco Giants, he gave up his spot in the line-up to Delmon Young and was relegated to pinch-hitting duties, then started Games 3 and 4 in Detroit but ended the Series 1 for 9 as the Tigers were swept in four games.

Just as it seemed Dirks had established himself as a long-term starter in the outfield for the Tigers, he had an off-year in 2013. His batting average fell to .256 in 131 games, a big problem for a player who derives much of his value from hitting for a high average. He had 16 doubles, 2 triples and 9 homers, but saw his slugging percentage fall by over 100 points to .363. His OPS+ tumbled from an excellent 129 in 2012 to only 86, well-below average for a corner outfielder. As a result, he began to lose playing time as the season advanced, and when the post-season rolled around, manager Jim Leyland decided to bench him in order to find a spot in the line-up for Jhonny Peralta, who was coming back from a 50-game drug suspension and who had been in the meantime replaced at shortstop by the better-fielding Jose Iglesias. As a result, Dirks only went to bat five times in the two rounds of the postseason in which the Tigers played that season, going hitless. Still, he was expected to at least share a regular job in left field with recently acquired speedster Rajai Davis for the Tigers in 2014, but got some very bad news as spring training opened: bothered by a bad back, he went to see a specialist who advised him that he needed surgery on a displaced disk, meaning he would likely miss three months of action. More bad news followed in mid-July, when a rehabilitation assignment with the Class A Lakeland Flying Tigers had to be stopped after a few days due to a recurrence of inflammation in his lower back, sending him back to the DL.