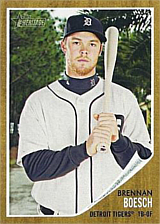 Outfielder Brennan Boesch reached the major leagues in 2010. He spent six seasons in the bigs, primarily with the Detroit Tigers.

Boesch began his pro career with the Oneonta Tigers, hitting .291/.344/.435. He led the NYPL with 54 RBI in 70 games and his 85 hits were second to teammate Scott Sizemore (picked two rounds after Boesch). He was also third with 127 total bases (two behind leader Chris Vinyard) and tied for 4th with 6 triples, two shy of leader Alex Presley. He was named a midseason NYPL All-Star (no postseason All-Star team was chosen). Baseball America did not rate him one of the loop's top 20 prospects (Sizemore was the only Oneonta player picked, at #9) but they did name him the #16 Tigers organization prospect. Moving up to the West Michigan Whitecaps in 2007, Brennan fell to .267/.297/.378. Despite his unimpressive slugging percentage and only 10 homers, he finished fifth in the Midwest League with 86 RBI. Baseball America dropped him to the #24 Tigers prospect in their postseason rankings. In '08, the Californian did nothing to raise his stock, batting just .249/.310/.379 for the Lakeland Flying Tigers with only 7 home runs. He did tie for third in the Florida State League with eight triples, the lone positive. Boesch put it together in 2009. He batted .275/.318/.510 for the Erie SeaWolves with 89 runs scored, 26 doubles, 28 homers, 93 RBI and 11 steals in 13 tries. The lone negatives were 33 walks to 127 strikeouts and his mediocre OBP. He led all Tigers farmhands in runs scored, home runs, RBI and slugging, also pacing the Eastern League in total bases (269), extra-base hits (61), home runs and outfield assists (15). He was third in RBI, behind Brett Pill and Carlos Santana, third in slugging (.066 behind Brian Dopirak), tied for third in triples (7), tied for fourth in runs scored and fifth in hits (145). He made the EL All-Star outfield alongside Quintin Berry and Michael Taylor. Baseball America rated him the best power prospect in the EL though they left him off their top 20 prospect list for the circuit; they did rate him Detroit's #25 prospect. That winter, he went 14 for 66 with four doubles, a triple, two homers and 13 RBI for the Leones del Escogido of the Dominican League.

Boesch began 2010 with the Toledo Mud Hens and burst onto the AAA scene by hitting .379/.455/.621 with 17 RBI in 15 games. That hot start, coupled with a Carlos Guillen injury, led to his being called up to The Show, where he joined fellow rookie Austin Jackson in the 2010 Tigers outfield. Brennan hit 5th in his MLB debut, between Miguel Cabrera and Brandon Inge, while playing DH. In his first at bat, he doubled off Rich Harden but was stranded. He later flew out, singled and struck out for a fine debut. Later that week, he and Sizemore both homered in the same game. It had been eight years since Victor Martinez and Earl Snyder had been the last rookie teammates to both launch their first MLB homer in the same contest. Brennan's first long ball in the majors was a grand slam off Joel Pineiro. He succeeded Jackson as the American League's Rookie of the Month in May, hitting .345 with 8 doubles and a .515 slugging percentage during the period. He finished his first season hitting .256 with 14 homers and 67 RBI in 133 games.

Boesch was the Tigers' starting right fielder for most of 2011, until tearing a ligament in his thumb in a game on August 21st. He appeared on the field a few more times after that, but in early September, team management confirmed he was done for the season. He ended the season with a batting line of .283/.341/.458, with 25 doubles, 16 homers and 75 runs scored in 115 games. He started slowly in 2012, finishing with a .240 average, 12 home runs and 54 RBI, and became a victim of the team's numbers crunch in 2013. Following the signing of All-Star Torii Hunter, Boesch was released in the middle of spring training and caught on with the New York Yankees. Brennan had a hot bat with the Yankees, slugging .529 in 23 games, but the injury bug bit him and he was released while on a Triple A rehab assignment. He saw time in the bigs with the Los Angeles Angels in 2014 and the Cincinnati Reds in 2015, retiring in April 2017 after spending all of 2016 in Triple A with the Boston Red Sox organization.