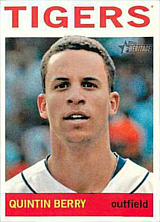 A bonafide speed merchant, Quintin Berry reached the majors in 2012 after stealing 261 bases and leading his league three times in swipes in just over six minor league seasons.

Berry hit .425 with 18 steals as a high school senior, where he was a teammate of Adam Jones. He went to junior college and batted .333 in 2004, then transferred to San Diego State. In 2005 with the Aztecs, Berry hit .419 with 18 stolen bases in 229 at bats to become the school's first .400 hitter in 13 years and the first in Tony Gwynn's tenure. His 43 runs scored in 27 games led the Mountain West Conference, also pacing the MWC in average, hits (96) and steals (18) and making the All-Conference outfield. He was 9th in NCAA Division I in average; 6 of the higher players were juniors or seniors and the other two were Shane Robinson and Aaron Bates. The following year, he hit .335 with 32 stolen bases in 239 at bats and led the MWC in swipes once again. He was subsequently drafted by the Phillies in the fifth round of the 2006 amateur draft. He was signed by scout Darrell Conner and made his pro debut that summer.

Berry began his professional career in 2006, hitting .219/.314/.248 with 19 stolen bases in 62 games for the Batavia Muckdogs. He tied for the team lead in swipes while only being caught four times, led the club with 25 walks and tied for the most runs scored (34). He improved his batting average nearly 100 points in 2007, hitting .312/.395/.386 with 55 stolen bases and 86 runs in 126 games for the Lakewood BlueClaws. He led the South Atlantic League in stolen bases but also times gunned down (18). He tied for 8th in the SAL in average and for 5th in the affiliated minors in times caught stealing. He tied Jason Donald for the best OBP of a Philadelphia minor leaguer. The 2009 Phillies Media Guide listed him as being a SAL postseason All-Star but the 2008 Baseball Almanac does not list him on the SAL All-Star team. For the Clearwater Threshers in 2008, he hit .272/.360/.341 with 51 stolen bases in 134 games. He picked it up in the second half, hitting .304 after the All-Star break, including a 30-game hitting streak. He led the Florida State League in steals and in times caught stealing (14). He made the FSL All-Star outfield alongside Jim Adduci Jr., Chris Heisey and Cory Patton. He led all Phillies farmhands in steals. He hit .311 for Mesa in the Arizona Fall League. In 135 games for the Reading Phillies in 2009, he hit .266/.355/.335 with 48 stolen bases in 62 tries and 89 runs scored. He was one swipe behind Eastern League leader Jose Constanza for the circuit's most. Berry led EL outfielders with a .993 fielding percentage and made the All-Star team again as well as leading Phillies farmhands in steals again. Baseball America rated him the best baserunner in the 2009 EL, the first time he was honored despite his steal success.

In 2010, he slumped to .210/.312/.294 in 66 games for Reading, missing time with a viral infection. He was waived and claimed by the San Diego Padres, where he was no better with the San Antonio Missions, hitting .209/.293/.264 in 33 games the rest of the year. He stole 27 bases in 35 tries that year. The New York Mets took him in the AA phase of the 2010 Rule 5 draft but released him in spring training and he signed with the Cincinnati Reds. He had a resurgence with the Carolina Mudcats, hitting .297/.399/.409 with 40 steals (in 47 attempts) over 93 games. Promoted to the Louisville Bats, he was only 1 for 18. He led the Southern League in stolen bases (two ahead of Kevin Mattison) and was third in the Reds chain (after Billy Hamilton and Ryan LaMarre). With a fifth organization in three years, he signed with the Detroit Tigers as a minor league free agent. He began 2012 with the Toledo Mud Hens and was doing okay (.270/.368/.321 in 39 games, 19 steals in 22 attempts). He was second in the IL in steals (behind Luis Durango) when Detroit called him up, with Austin Jackson injured.

In his major league debut, he led off and played center field. He grounded out his first two at bats against Zach McAllister. In the third, he doubled and scored on an Andy Dirks hit, finishing the day 1-for-5 with the run scored. He played 94 games for the Tigers, hitting .258/.330/.354, scored 44 runs and drove in 29. He hit 10 doubles, 6 triples and 2 homers. He set an American League record by stealing 21 bases without being caught stealing. He played mostly left field, and got significant playing time in the postseason. In the ALDS, he went 3 for 10 with a double against the Oakland Athletics, then was 2 for 8 with a double and a pair of runs scored in the ALCS against the New York Yankees. In the World Series, the San Francisco Giants' pitchers limited him to a walk in 9 plate appearances. Berry bounced between multiple franchises the next few years, spending the majority of his time each year in the minors at the AAA level. He earned September call-ups to the bigs four times in fives years (Boston Red Sox in 2013, Baltimore Orioles in 2014, Chicago Cubs in 2015, and Milwaukee Brewers in 2017). His main role in limited duty was as a pinch runner and defensive replacement in the outfield. He did earn a World Series ring in 2013 for his postseason work with the Red Sox, stealing 3 bases in 3 pinch running appearances. His playing career ended in the minors when he retired following the 2018 season.

Berry quickly transitioned into coaching, being named the Brewers outfield and base running coordinator for the 2019 campaign. In 2021, he was promoted to the major league coaching staff as first base coach.