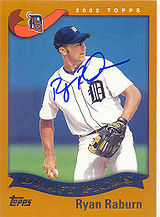 Originally selected at age 18 by the hometown Tampa Bay Devil Rays in the 18th round of the 1999 amateur draft, Ryan Raburn did not sign. He instead elected to attend the South Florida Community College and was selected by the Detroit Tigers in the 5th round of the 2001 amateur draft; he was signed by scout Steve Nichols. In 2003, Raburn spent his first professional season with the West Michigan Whitecaps and the Lakeland Tigers. The following year Raburn spent most of the season with the Erie SeaWolves.

On September 12, 2004, Ryan Raburn, received his first Major League call-up and struck out against the Minnesota Twins as a pinch hitter in his first at bat. Four days later, he hit an RBI double off the Cleveland Indians' C.C. Sabathia for his first Major League hit. Raburn was selected by the Tigers to play in the Arizona Fall League following the 2004 season. His fall season with the Grand Canyon Rafters proved to be very productive: he hit three doubles, four home runs and eight RBI, scoring 17 runs in 21 games.

In 2005, Raburn was the starting second baseman for the Toledo Mud Hens. In 2006, he split the season between second base and the outfield for the Mud Hens. He earned honors playing left field for the 2006 International League All-Star Team. Raburn also came in second behind Andy Marte in the 2006 AAA All-Star Game Home Run Derby. He was again selected for the IL All-Star team in 2007, but was called up to Detroit prior to the July event. In one of his first games in Detroit, he impressed the Tigers by collecting 7 RBI in a single game. Throughout the 2007 season, Raburn established himself as a vital utility player alternating between left field and second base.

On May 15, 2009, he and teammate Brandon Inge hit grand slams against the Oakland Athletics in a 14-1 win; it was the first time since June 24 1968 that the Tigers had hit two grand slams in one game. That last time, Jim Northrup had hit both blasts.

On April 18, 2011, Raburn became the first player ever to hit a roof truss in Safeco Field. The Seattle Mariners estimated that the ball was hit 175 feet high. The ball hit a truss in foul territory on the third base side and was not caught.

Playing for the Cleveland Indians in 2013, Raburn finished the month of April with a bang, having back-to-back two-homer games on April 29th and 30th. He had seven hits, scored 5 runs and drove in 7 over the two games, a 9-0 shutout of the Kansas City Royals and a 14-2 trashing of the Philadelphia Phillies in which the Indians banged seven homers - one shy of the team record. He finished the month with a .320 average, but ironically had not hit a homer and had collected only one RBI before the two-game barrage.