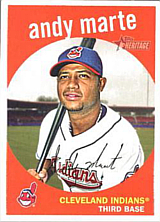 Andy Marte was a highly-touted third base prospect out of the Dominican Republic. He was signed by scouts Rene Francisco and Julian Perez for the Atlanta Braves and had early success in the Braves minor league system.

Marte debuted in the bigs at the age of 21 in 2005. His first short stint with the Braves was not a successful one as he hit .140 in 22 games. That performance raised questions about his ability to hit at the big league level. The Braves traded him to the Boston Red Sox for Edgar Renteria after the season, then the Red Sox turned around and flipped him to the Cleveland Indians in a multi-player deal in which they received Coco Crisp.

In 2007, Marte was bestowed the Indians' starting job at third base for Opening Day. He did not perform well and went down with an injury early in the season. In the 16 games he did play, he hit .180 with one home run and 8 RBI in 50 at bats. After recovering from the injury, Marte was demoted to Triple A Buffalo. Casey Blake moved back to third base for Cleveland, with Ryan Garko taking over Blake's first base duties. Marte hit .267 with 17 doubles and 16 home runs in 96 games for Buffalo, a virtual carbon copy of his 2006 performance for the team. He played a few games for the Indians in September, but failed to raise his batting average above the Mendoza Line. After the 2010 season, he was outrighted off the 40 man roster.

On July 31, 2014, Marte returned to the major leagues after not playing at that level since October 3, 2010. Suiting up for the Arizona Diamondbacks, he walloped a home run in his first at bat back, a two-run shot off Pittsburgh Pirates pitcher Jeff Locke.

Marte played in the Korea Baseball Organization in 2015 and 2016, taking advantage of a high-offense era to hit 20 homers both years and hit a combined .312 with KT Wiz.

While playing winter ball in the Dominican Republic on January 22, 2017, he was the victim of a car crash on a highway between San Francisco de Macoris and Pimentel. Sadly, he was not the only ballplayer to die in a car accident that night, as pitcher Yordano Ventura was also killed in a separate crash.