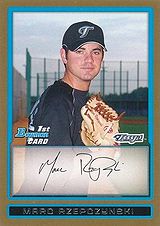 Left-hander Marc Rzepczynski was drafted by the Toronto Blue Jays in the 5th round of the 2007 amateur draft. He was signed by scout Demerius Pittman for $110,000 and made his pro debut that summer.

Rzepczynski was called up from Triple-A Las Vegas on July 7, 2009 to make his Big League debut as the Toronto Blue Jays faced the Tampa Bay Rays at Tropicana Field. In his debut, he gave six innings of two-hit ball, while allowing one run and striking out seven batters, walking four. Rzepczynski was the fifth pitcher to make his debut in the majors in 2009 with the Blue Jays; his turn came after Scott Richmond was placed on the 15-day disabled list, and his replacement Bradley Mills complained of bruised ribs after a game in Vegas on the prior Thursday. Overall, he made 11 starts that year for Toronto, going 2-4 with a solid 3.67 ERA and 60 strikeouts in 61.1 innings.

Rzepczynski was injured during spring training of 2010 when he took a ball off his shin, costing him a chance to be a part of the Jays' starting rotation. He came back to the big club in August and pitched a few good games, going 4-4, 4.95 in 14 games, but team management decided he would be more useful as a reliever. He started 2011 as the Jays' top lefthanded reliever and did quite well in the new role. He was 2-3, 2.97 in 39.1 innings over 43 appearances when the Jays traded him to the St. Louis Cardinals on July 27th as part of an 8-player deal whose marquee names were P Edwin Jackson and OF Colby Rasmus. He went 0-3, 3.97 pitching for the Cardinals down the stretch, but was an important part of the Cards' bullpen in the post-season, as his presence helped manager Tony LaRussa to play the match-up game by alternating right-handed and left-handed relievers in the late innings. He thus pitched 12 times in the three rounds of the postseason, most of them in tight situations. he was credited with a win over the Milwaukee Brewers in the 2011 NLCS and did not give up a run in four appearances in the 2011 World Series as the Cardinals defeated the Texas Rangers in 7 games. He then was 1-3, 4.24 in 70 appearances for the Cardinals in 2012, then made another five appearances in the postseason.

Rzepczynski started the 2013 season poorly, with a 7.88 ERA in 9 April appearances, earning a ticket back to AAA. He made 32 appearances for the Memphis Redbirds, going 1-2, 3.07 in 44 innings and came back to the Cards in late July, pitching twice more before being traded to the Cleveland Indians for Juan Herrera on July 30th. He turned things around completely with the Indians, giving up only 2 earned runs in 27 games for an ERA of 0.89. he then spent all of 2014 with Cleveland, pitching 73 times in relief with a record of 0-3, 2.74 and 1 save, the first of his career. He struck out 46 batters in 46 innings as he was used in his now familiar role as a lefty specialist. In 2015, he went 2-3, 4.43 in 45 games for the Indians, logging only 20 1/3 innings as his role became ever more specialized. On July 31st, he was traded to the San Diego Padres in return for OF Abraham Almonte. He pitched 27 times for San Diego, but his ERA rose to 7.36, the result of allowing 14 runs (12 earned) in 14 2/3 innings. On December 2nd, he was traded again, this time to the Oakland Athletics alongside 1B Yonder Alonso in return for Ps Drew Pomeranz and Jose Torres and a player to be named (Jabari Blash).

Rzepczynski again split his season between two teams in 2016. With Oakland, he pitched 56 times with a record of 1-0 and an ERA of 3.00. On August 25th, he was traded to the Washington Nationals for minor leaguer Max Schrock, where he put up an ERA of 1.54 in 14 games. Altogether, his ERA was 2.64 in 47 2/3 innings, during which he struck out 46 batters but also walked 29. He was charged with a loss in Game 5 of the Division Series against the Los Angeles Dodgers on October 13th. He replaced Max Scherzer in the top of the 7th after he had given up a game-tying homer to Joc Pederson and walked the only batter he faced, Yasmani Grandal and was immediately replaced by Blake Treinen. Grandal would eventually come around to score the winning run, saddling Marc with the loss as Washington was eliminated. He had previously pitched twice in the series, giving up no runs in 2 innings, although he had walked 3 batters. He was a free agent after the season and on December 3rd signed a two-year contract with the Seattle Mariners.

The "R" in his last name is silent and it is pronounced "Zepchinski". He is of Polish descent. His nickname is "Zep", which he picked up during high school as the other students found his last name hard to pronounce.

Marc is the first major league player to have a surname that starts with the letters "Rz". There have been five minor league players with "Rz" last names including a Walter Rzepczynski who pitched in the Chicago Cubs and Chicago White Sox organizations in 1948.