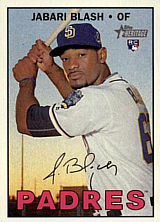 Outfielder Jabari Blash grew up on St. Thomas. Like many young Virgin Islanders, he went to college on the mainland. He attended Alcorn State University for a year but was not eligible for the baseball team because of transcript issues. Blash was a "draft and follow" player who was selected three times before he finally turned pro. First, the Chicago White Sox picked him in the 29th round in 2007 out of high school, one pick before Collin Cowgill. Two years later, the Texas Rangers selected him in the 9th round of the 2009 amateur draft out of junior college, one pick ahead of Preston Guilmet. Finally, the Seattle Mariners selected him in the 8th round in 2010, one selection ahead of Pat Leyland. The scout was Mike Tosar.

In the 2015 Rule V Draft, December 10, 2015, Blash was plucked from the Mariners by the Oakland Athletics, then immediately flipped to the San Diego Padres as the player to be named later in the December 2nd trade that brought first baseman Yonder Alonso and pitcher Marc Rzepczynski to Oakland for Drew Pomeranz and Jose Torres. On March 27th, Jabari hit the first of five Padres homers off Brady Rodgers in an eight-run 1st inning, as they destroyed the Houston Astros, 21-6, in the second of two exhibition games played at Estadio Fray Nano in Mexico City. He started the year with the Padres but spent most of that season in the minors, logging 38 games in the majors, during which he hit .169 with 3 homers and 5 RBI. He did slightly better in 2017, upping his average to .213 with 5 homers and 16 RBI in 61 games. On December 12th, he was traded to the New York Yankees in return for third baseman Chase Headley and pitcher Bryan Mitchell. It was a deal conceived to allow the Yankees to shed payroll in the wake of having acquired the mega-contract of outfielder Giancarlo Stanton the day before, and it appeared Blash would not get a chance to be more that someone who provides organizational depth at the AAA level. Indeed, on February 21, 2018, before he had had a chance to show anything in spring training, he was sent to the Los Angeles Angels in return for future considerations, in order to free up a spot on the 40-man roster. On November 29, the Angels waived him. Undaunted, he headed to Nippon Professional Baseball, slugging 33 home runs and driving in 95 runs for the Tohoku Rakuten Golden Eagles in 2019.

His brother, Jamori, began his pro career in 2017 with the GCL Nationals after being drafted in the 23rd round of the 2017 draft.