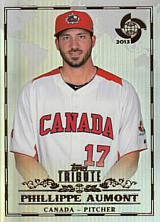 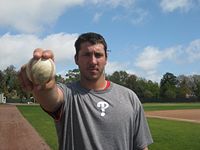 Phillippe Aumont was the third-highest drafted Canadian ever when he was chosen 11th overall by the Seattle Mariners in the first round of the 2007 amateur draft. Aumont was the ace of the Canadian junior national team that lost in the semifinals to South Korea in the 2006 World Junior Championship. The only Canadians that had been drafted higher were Adam Loewen (#4 in 2002) and Jeff Francis (#9 in 2002). Aumont was signed by scout Wayne Norton, but did not pitch in the minor leagues in 2007. He made his debut for Team Canada's senior team in the 2007 Baseball World Cup, getting the start against the mighty Cuban national team. He pitched two innings, striking out one and allowing two hits, before being relieved by Scott Richmond. It was Aumont's lone appearance of the Cup.

Aumont made his professional debut on April 5, 2008 for the Wisconsin Timber Rattlers. He threw four hitless innings, walking one and striking out four as Wisconsin topped the Quad Cities River Bandits, 2-0. He said "The World Cup definitely helped prepare me for today. I faced a lot of Double A and Triple A hitters, so I had plenty of confidence I could do it here." Aumont finished the season 4-4 with 2 saves and a 2.75 ERA for Wisconsin. Baseball America ranked him the #8 prospect in the Midwest League. He had initially decided to skip the 2009 World Baseball Classic but later agreed to pitch for Canada. He was used for an inning in Canada's opening game against Team USA on March 7th in Toronto, and impressed everyone when he escaped a no out, bases loaded jam by striking out Kevin Youkilis and Curtis Granderson and forcing David Wright to hit a soft liner.

In 2009, he was named the 93rd best prospect overall by Baseball America. That year, he went 2-6 with a 3.88 ERA and 59 strikeouts in 44 relief appearances for the High Desert Mavericks and West Tenn Diamond Jaxx. On December 16th, he was traded, with Tyson Gillies and J.C. Ramirez, to the Philadelphia Phillies for Cliff Lee. He went 3-11 with a 5.68 ERA in 2010, splitting time between the Clearwater Threshers and Reading Phillies as the Phllies attempted to convert him to a starting pitcher, a move that was much criticized beforehand, since Aumont had displayed the typical closer's stuff and makeup up to that point. Realizing their mistake, the Phillies put him back in the bullpen in 2011 and he did much better. He went 1-5, 2.32 with 41 strikeouts in 31 innings in 25 games for AA Reading, then was promoted to the AAA Lehigh Valley IronPigs, where he went 1-0, 3.18, and struck out another 37 batters in 22 2/3 innings over 18 games. With Aumont now only a short step away from the big leagues, the Phillies brought him to Philly during the winter to be part of their "Prospect education program", aimed at preparing some of their top minor leaguers to the challenges of life in the big leagues. The only question was whether he would make the team out of spring training in 2012, or have to wait until an opening caused by injury or ineffectiveness.

He finally got the call on August 20, 2012 when the Phillies placed pitcher Jeremy Horst on paternity leave. Aumont had spent the entire season to that point with Lehigh Valley, going 3-1 with a 4.26 ERA and 15 saves in 41 outings. His electric stuff was still on display, with 59 strikeouts in 44 1/3 innings, but he was also still working on his control and consistency, as witnessed by his 34 walks - as many as the number of hits he had allowed. He made his major league debut August 23rd, facing the Cincinnati Reds, entering the game in the 8th inning in relief of Cole Hamels and B.J. Rosenberg with the Phillies trailing, 3-2. He pitched a scoreless inning, allowing only a two-out walk to Miguel Cairo and was replaced by pinch-hitter Ty Wigginton in the bottom of the inning after the Phillies had tied the score, which his teammates went on to win, 4-3, in 11 innings. He pitched 18 games for the Phillies that first season, with a loss and two saves and a 3.68 ERA. In 14 2/3 innings, he gave up 10 hits and 9 walks but struck out 14.

Aumont pitched for Team Canada in the 2013 World Baseball Classic, but was hit hard in his only appearance against the Italian national team, when he gave up 3 runs on 3 hits and a walk in two-thirds of an inning on March 8th - a far cry from his brilliant turn on the mound four years earlier. He made the Phillies' bullpen out of spring training in 2013 and did not allow an earned run in his first five appearances. But his record stood at 1-2, the result of a couple of unearned runs allowed in key situations. The second of those losses came in particularly unusual circumstances on April 17th; the previous day, he had been announced to pitch the bottom of the 9th in a scoreless game against the Cincinnati Reds at Great American Ballpark when the skies opened and forced the suspension of the game before he could throw a pitch. The game resumed before a sparse mid-afternoon crowd the next day, and he loaded the bases without recording an out, in part due to an error by center fielder Ben Revere, before Joey Votto ended the game with a single. The resumed game took all of 9 minutes without the Phillies getting a chance to return to bat; it was the Phillies' first suspended game since Game 5 of the 2008 World Series. He made 22 appearances for the Phillies that year, with a record of 1-3, 4.19. In 19 1/3 innings, he gave up 24 hits and 13 walks, striking out 19.

Struggling with his control, Aumont was unable to claim a regular spot in the Phillies' bullpen. In 2013, he pitched 32 times for Lehigh Valley, with a record of 0-2, 4.40 and 2 saves, and most of 2014 was also as a resident of Allentown, PA. He made 35 appearances in relief for the IronPigs that year, going 3-3, 3.93. He struck out 65 in 55 innings, but also walked 39. His few appearances for the Phillies went pretty badly as he was 0-1 with a 19.06 ERA in 5 appearances, the result of giving up 12 runs in only 5 2/3 innings. Frustrated with Aumont's inability to develop as a reliever, the Phillies put him back in the starting rotation with Lehigh Valley in 2015. Things went much better suddenly, as in 14 games (10 starts) his ERA was a very good 2.35. Control was still an issue, with 41 walks in 65 innings, and his record was only 3-4, but he got a chance to start a game for the Phillies on June 19th, his first appearance as a starter in the majors in place of an injured Cole Hamels. It did not go well, as he allowed 6 runs on 5 hits and 7 walks in 4 innings against the St. Louis Cardinals, who took advantage of his wildness to win, 12-4. He was designated for assignment after the game and declined an outright assignment, becoming a free agent. Stints in the Toronto Blue Jays and Chicago White Sox organizations followed before his retirement in June 2016.

Aumont starred for Canada when they won the 2015 Pan American Games. He went 2-0 with 16 whiffs, 6 hits and 3 walks in 13 shutout innings. He went five innings to beat Nicaragua 9-1. In the semifinals, he tossed eight shutout innings of three-hit ball, fanning eight, to beat Puerto Rico 7-1. He helped Canada win the Gold Medal, their second Pan American Games Gold in a row; only Cuba had previously won more than one. Aumont led the Pan Ams in ERA, tied Nate Smith and Lázaro Blanco for second in wins (one behind teammate Chris Leroux) and was second in whiffs (two shy of Blanco).

Aumont came out of retirement to join the Ottawa Champions of the Can-Am Association in June 2017, then ten days later was named interim pitching coach of the team after the firing of Miguel Gómez. On June 28th, he pitched the first no-hitter in team history, shutting out the Dominican Republic Team, 7-0, in a masterful performance in which he struck out 11 and walked only one batter. Overall, he went 5-8, 4.51 with 103 strikeouts and 30 walks in 115 2/3 innings. Following the season, he took part in a major league evaluation camp in Arizona and impressed enough to be offered a contract by the Detroit Tigers. He split 2018 between the AA Erie Otters and AAA Toledo Mud Hens, going a combined 2-4, 6.23 in 31 games.

In 2019, he returned to Ottawa as a player-coach under new manager Sébastien Boucher. On June 16th, in the first game of a doubleheader against the Cuban national team, he almost reproduced his feat of two years earlier, as he set down the first 17 batters in order before allowing a pinch single to César Prieto. He then retired the final four batters, also in order, to finish with a seven-inning one-hitter in which he struck out 9 and walked none. On July 16th, he set a league single-game record with 18 strikeouts in a 5-2 win over the Rockland Boulders. After a pause, during which he joined Team Canada for the 2019 Pan American Games in Lima, Peru, he set another record August 18th, when his 131st strikeout set a new single-season record in the Can-Am Association. At season's end, the new record stood at 145 strikeouts, in just 118 2/3 innings and he won the circuit's Pitcher of The Year award after going 8-4, 2.65. He signed a contract with the Toronto Blue Jays for 2020 and was in spring training with them when the coronavirus pandemic shut down baseball. That June, he announced that he was retiring as a player to concentrate on running the farm he had recently acquired, but left the door open for a comeback if the national team came to call for the pushed back 2020 Olympics.