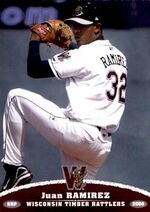 J.C. Ramirez, also known as JC Ramirez, signed with the Seattle Mariners in 2005 after being scouted by Luis Molina and Nemesio Porras. He began his minor league career in 2006, pitching for the VSL Mariners. With them, he went 5-1 with a 1.66 ERA in 14 games (13 starts). He led the Venezuelan Summer League in ERA.

Ramirez pitched for Nicaragua in the 2013 World Baseball Classic Qualifiers, appearing in their 6-2 loss to Panama. He relieved Pedro Rayo in the 7th with a 4-2 deficit. Carlos Lee grounded out, Luis Castillo drew a walk, Jose Macias grounded Castillo over and Angel Chavez drew an intentional walk. Concepcion Rodriguez singled in a run and Jeffer Patino walked as well. Jhonny Polanco then relieved Ramirez. He began the summer of 2013 back with Reading but moved up after 4 games (1-0, 2 H, 8 K in 7 IP, 0 R) and was 2-2 with two saves and a 6.53 ERA after 23 games for Lehigh Valley. He was called up when Mike Adams went on the DL.

In his major league debut for the Phillies against the New York Mets on June 23, 2013, he struck out the side in order in the 8th inning of an 8-0 loss; his victims were Juan Lagares, Omar Quintanilla and Kirk Nieuwenhuis. He relieved Joe Savery and was replaced by Jake Diekman in the 9th.

After 111 major league appearances as a reliever, Ramirez made his first start on April 14, 2017, for the Los Angeles Angels against the Kansas City Royals. He gave up 5 runs in 5 innings and was charged with a 7-1 loss.

His date of birth is in dispute, some sources say 1986 while others say 1988; mlb.com and Baseball-reference both list 1988.