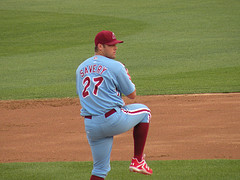 Pitcher Joe Savery was selected by the Philadelphia Phillies in the first round of the 2007 amateur draft and reached the majors with the club in 2011, although the road there was anything but straight, since he had given up on pitching a few months before making his big league debut.

A quarterback, punter, pitcher and position player in high school, Savery hit .556 as a senior while going 11-0 with a 0.53 ERA. He was picked by the Los Angeles Dodgers in the 14th round of the 2004 amateur draft but did not sign.

Savery was the only freshman named to any of the three Baseball America All-American squads in 2005, being the second-team utility man after Mike Costanzo was the first-team pick and one team ahead of Micah Owings at #3. Savery had gone 8-5 with a save and a 2.43 ERA, striking out 129 in 118 innings while hitting .382/~.473/.559. He led the Western Athletic Conference in batting average and batters struck out while finishing second in ERA. He made the All-Conference team as both a first baseman and starting pitcher and won Player of the Year honors. He won the Baseball America Freshman of the Year Award.

Savery joined the Team USA college edition but struggled, with a 9.00 ERA in four appearances. He struck out 13 in 9 innings but walked 11. Only Sean Doolittle had a worse ERA on the team. Savery did not play the field as Matt Wieters and Matt LaPorta were available at first base.

Savery was Conference USA Player of the Year in 2007. He hit .356 and was 8-1 with a 2.41 ERA. He was an All-Conference infielder and second-team All-Conference pitcher, tying for third in C-USA in ERA. Rice played in the 2007 College World Series. 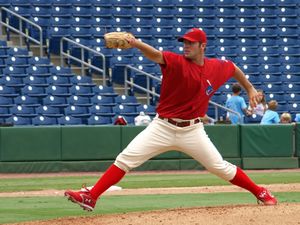 The Philadelphia Phillies took Savery with the 19th pick of the 2007 amateur draft. He was signed by scout Steve Cohen and made his pro debut that summer with the Williamsport Crosscutters, going 2-3 with a 2.73 ERA in 7 starts. In 2008, he was 9-10, 4.13 in 27 games for the Clearwater Threshers of the Florida State League. He had a great record for the AA Reading Phillies in 2009, going 12-4 in 21 games, even though his ERA was only 4.41. He was promoted to the AAA Lehigh Valley IronPigs and continued his winning ways, going 4-2 over 7 more starts to finish 16-6, 4.40. While he looked close to making it to the Show by that point, his peripheral numbers were far from dominant, with 153 hits allowed in 151 1/3 innings and 77 walks to offset his 96 strikeouts. His luck turned around completely in 2010: while his ERA rose only slightly, to 4.66, he was an awful 1-12 for Lehigh Valley, giving up 154 hits while striking out only 67 in 127 1/3 innings.

Savery began to question his choice to become a pitcher at that point, and decided to instead try his luck as a position player in 2011. Back at Clearwater, he hit .307 in 54 games as a first baseman, with 9 doubles, 22 runs scored and 25 RBI, showing a very good batting eye with 21 walks against 28 strikeouts. He only pitched once for the Threshers, a scoreless two-inning stint, and earned a promotion to Reading strictly based on his batting numbers. He played DH briefly in AA, but then destiny struck as the team needed an extra pitcher. Giving pitching another try, he was suddenly dominant on the mound: in 9 relief appearances, he gave up only 1 run on 7 hits and no walks, while striking out 14. His next promotion, back to Lehigh Valley, was earned on the mound. He finished the season there with 18 relief appearances, going 4-0 with 2 saves, a 1.80 ERA and 26 strikeouts against only 6 walks. Savery could not explain the turnaround in his performance except that stepping off the mound for 9 months and looking at the game from an infielder's perspective had given him a new outlook. He said it was akin to an "act of God". The Phillies were impressed enough to call him up when rosters expanded in September, and he made his major league debut on September 20, 2011, with a scoreless third of an inning against the Washington Nationals. He pitched 3 more times before the season ended, finishing the year with a spotless ERA over 2 2/3 innings, having given up a hit but no walks and struck out 2.

In 2012, Joe's remarkable story continued when he made the big league team out of spring training, taking advantage of a couple of injuries to earn a spot.