(Redirected from National Baseball Hall of Fame and Museum)

The full name of the Hall of Fame is the National Baseball Hall of Fame and Museum. It is located in Cooperstown, New York. The Hall was dedicated in 1939. It is one of the oldest Halls of Fame in the country.

It was established by heirs to the fortune of Edward Clark, one of the two founders of the Singer Manufacturing Company, known for its sewing machines. Members of the Clark family still sit on the Hall's board of directors to this day, including Board Chairperson Jane Forbes Clark. On a day-to-day basis, it is run by a President. The most recent holders of the position have been Dale Petroskey (1999-2008) and Jeff Idelson (starting in 2008). Idelson retired in 2019 and was replaced by Tim Mead, who was previously public relations director for the Los Angeles Angels, on June 24th. However, Mead found the bi-coastal commute and separation from his family too difficult during the COVID-19 pandemic and stepped down in April of 2021. Idelson came back to his old position while the board searched for a replacement, and Josh Rawitch, who had previously been the head of public relations for the Los Angeles Dodgers, took over following the 2021 induction ceremony that September.

Currently, The Hall of Fame is made up of the museum, where notable baseball memorabilia is on display, the actual Hall of Fame, where plaques of inductees are displayed, and a library.

The Hall is open daily 9 AM to 9 PM in the summer and 9 AM to 5 PM in the off-season. It is closed on Thanksgiving, Christmas, and New Years Day.

In addition to players, managers, pioneers and executives have also been inducted into the Hall of Fame. The Hall also awards the J.G. Taylor Spink Award to newspaper writers and the Ford Frick Award to broadcasters. Winners of these awards are not technically Hall of Famers, but they are recognized as having reached the pinnacle of their profession.

There are two avenues to election to the Hall of Fame for players. 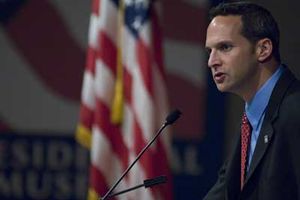 A player is eligible for election to the Baseball Hall of Fame if satisfies the following criteria:

Changes in The Voting Process[edit]

Rule changes also happened on the other end of the spectrum: how long a player could stay on the ballot. From 1946-1956, the rule was that a player must have been active at some point in the 25 years prior to the election – it was increased to 30 years from 1956-1962, and was 20 until the 2015 ballot, when it was trimmed by five years as the Hall was facing an increasingly crowded ballot, because of the risk of players tainted by steroids who were likely to stay on the ballot for years with little hope of being elected by the voters, and taking votes away from other deserving players.

The Committee on Baseball Veterans[edit] 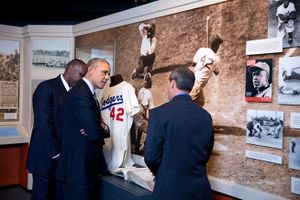 President Obama with Andre Dawson and Jeff Idelson, in front of the Jackie Robinson display at the HOF, in May 2014

The Veterans Committee has taken on many forms over the course of the last half century. The current construction was established in 2011. Baseball's history is broken into a number of eras, with more recent ones getting more frequent consideration than more distant periods from which candidates have been considered many times. On a rotational basis each era is voted on by a sixteen-member panel and any candidate receiving at least 12 votes (75%) is elected.