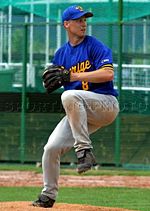 Magnus Pilegård has been one of the best players in Swedish baseball. When he was a kid, he would tape the one baseball game shown weekly on Swedish TV (broadcast around 3 AM) to get his baseball fix. He debuted for the Swedish national team in the 1997 European Championship, hitting .455 as a teenager.

He came to the US to play college baseball with aspirations of becoming the first Swedish player to make it to Organized Baseball. In 2001, he put on a show as a college junior, setting the UNC-Wilmington career record with a 26-game hitting streak. For the year, he batted .339. He made All-Colonial Athletic Association as a catcher.

During the 2007 European Championship, he hit .333/.375/.500 with 5 RBI and a team-high 5 runs in 8 games. He was third among Sweden's regulars in OPS behind Peter Johannesen and Lindberg. He also led the team with 3 doubles while serving primarily at catcher.