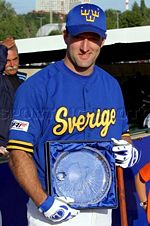 Will Rikard was a top American import in two European leagues.

In college, Rikard saw limited action his first three years, rarely batting and posting a 5.42 ERA. He became a starting corner outfielder as a senior, batting in the heart of the order. Will then went to play in the Elitserien of Sweden, where he starred. He came to Germany in 2001 with the Bonn Capitals and ranked among the leaders in OBP (4th, .500), slugging (9th, .573) and runs (32, 9th) in offense. On the mound, he allowed only 34 hits and fanned 77 in 63 innings, posting a 0.67 ERA. He led his ERA and lowest average allowed. He coached for the German national team in the 2001 European Championship.