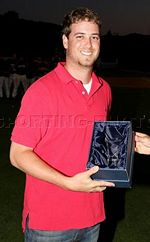 Adam Sorgi played briefly in the minor leagues and has appeared for the Swedish national team (he is Swedish-American).

Sorgi played in the 1997 Little League World Series; in the championship game, he relieved Gavin Fabian with two on, no outs and a 4-1 lead in the bottom of the last inning but served up a 3-run homer to Gabriel Alvarez then walked Javier De Isla, who would score the winning run as Sorgi took the loss. In 2002, he became his high school team's captain and was named a South State All-Star by the California Baseball Coaches' Association. In 2003, he hit .438 with 10 homers and was named his league's MVP. He was picked by the Philadelphia Phillies in the 49th round of the 2003 amateur draft but opted for college, attending Stanford University.

Sorgi missed 2006 due to a right shoulder injury but returned in 2007 to hit .375/.456/.451. He moved to second base that season. He was 6th in the Pac-10 in average and slugging, leading the Cardinal in both categories. He made the All-Conference team as a utility infielder.