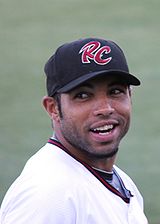 He was selected by the Oakland Athletics in the fifth round of the 2006 amateur draft, one round before they grabbed Andrew Bailey. The scout was Neil Avent. He made his pro debut on June 19th for the Vancouver Canadians, going 3-for-4 against the Yakima Bears, and hit .362/.460/.507 with 3 home runs and a team-high 14 stolen bases in 37 games. He had the best OBP of any Northwest League player with over 100 plate appearances and was second to Cyle Hankerd in average among players in that range. He played for the Kane County Cougars in 2007, leading the team in batting (.288), runs (79) and stolen bases (24). He was third in the Midwest League in OBP, 4th in runs (between Danny Perales and Sean Shoffit) and 4th in walks (between Shoffit and Scott Sizemore). He was second among A's minor leaguers in OBP. He failed to make the MWL All-Star team as the outfielders picked were Gorkys Hernandez, Gerardo Parra and Travis Snider. That fall, he hit .250 for the Waikiki Beach Boys.

He began 2011 with Midland and hit .355/.453/.589 with 67 runs in 74 games with the club to capture the Texas League batting crown (29 points over Mike Trout) and OBP lead. He tied Trout for the TL lead with 13 triples despite only playing 3 months in the TL. He reached base in 31 consecutive games. He also played error-free ball for Midland and went 2 for 2 with a triple, walk and run in the TL All-Star Game. He made the Texas League All-Star outfield, joining Trout, Tim Wheeler and J.D. Martinez. Promoted to the Sacramento River Cats, he batted .302/.401/.453 in his first 56 contests in AAA. He split A's Organizational Player of the Year with Michael Choice and led the Oakland minor leaguers in OBP, hits, runs, triples (16) and total bases while placing second in average (trailing Wes Timmons), walks (behind Conner Crumbliss) and steals (tied with three others). He was among the affiliated minor league leaders in triples (16, tied for 3rd with Cole Gillespie and Kevin Mattison behind Alfredo Silverio and Jeremy Moore), hits (178, tied for 4th with Starling Marte behind Jedd Gyorko, Gary Brown and Vinnie Catricala), walks (93, 5th behind Robbie Grossman, Jaff Decker, Crumbliss and Kody Hinze), OBP (.430, 5th) and times caught stealing (18, tied for 5th). He improved to .350 against right-handers while falling to .295 against southpaws. In the postseason, he batted .265 with 7 runs and 4 walks in 8 games for Sacramento.

That off-season, he was put on the A's 40-man roster. Baseball America rated him as the 8th-best Oakland prospect.