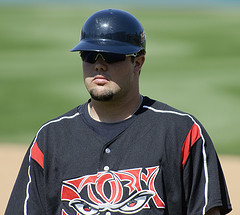 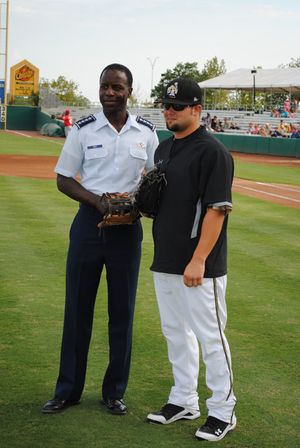 Outfielder Jaff Decker reached the majors with the San Diego Padres in 2013.

Decker was selected by the Padres as a supplemental pick at the end of the first round of the 2008 amateur draft. He was signed by scout Dave Lottsfeldt for $892,000 and made his pro debut that summer with the AZL Padres, for whom he hit .352 with 5 homers and was named Arizona League MVP. He spent 2009 with the Fort Wayne TinCaps, hitting .299 with a team-high 16 home runs. Playing for the San Antonio Missions in 2011, he hit just .236 but tied for the club lead with 19 homers and led the team with 92 RBIs.

After missing much of 2012 with a foot injury, Jaff began the 2013 season with the AAA Tucson Padres. He was called up to the majors in June and made his big league debut on June 20th against the Los Angeles Dodgers. Coming to the plate one time in the game as a pinch hitter for pitcher Luke Gregerson, he was walked by Peter Moylan but was then caught trying to steal second base to end the 8th inning. He played only 13 games in the big leagues, with a .154 average and one homer - a solo shot off Jhoulys Chacin of the Colorado Rockies at Coors Field in a 14-2 loss on August 12th. He spent most of August with the Padres, in addition to a pair of games in June, but only started 7 games in the field. At Tucson, he played 105 games, hitting .286/.381/.443, with 23 doubles, 10 homers and 63 runs scored. On November 25th, he and P Miles Mikolas were traded to the Pittsburgh Pirates in return for another outfield prospect, local San Diego boy Alex Dickerson.