Ed Konetchy has the most triples of any major leaguer not in the Hall of Fame. He was a slick-fielding first baseman who played mostly during the deadball era. He was a likeable man who was considered a top player due to his combination of offensive and defensive skills. Although he ranks #15 on the all-time list for most triples, he never led the league in that category (he was second twice). He consistently led the league in defensive categories, and would likely have won numerous Gold Gloves if they had existed then.

Konetchy played seven of his 15 major league seasons with the St. Louis Cardinals in the days shortly before Rogers Hornsby joined the team. He appeared once in a World Series, late in his career as part of the 1920 Brooklyn Robins.

The similarity scores method shows Wally Pipp and Hal Chase as the most similar players, but clearly he is also similar to Keith Hernandez, a player of more modern times who played when home runs were easier to hit and triples harder to hit. 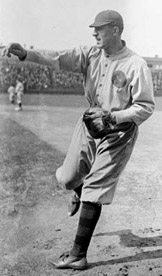