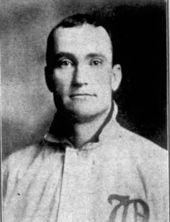 "Joe Delahanty (is) doing yeoman service with the willow." - Sporting Life, waxing eloquent about Joe's hitting, in the issue of May 28, 1898

Joe Delahanty was one of five Delahanty brothers to play in the majors. He was not the youngest of the five, but he was the last to come to the majors.

Joe made his major league debut at age 31 with the St. Louis Cardinals in 1907 and became the regular left fielder in 1908. He was the oldest regular position player on the team, and hit much higher than the team average of .223.

The following year, 1909, he was both the fourth outfielder and the backup second baseman, appearing in 123 games in total. His batting average, though, slipped while the team average was 25 points higher than the previous year.

His minor league career (1897-1912) included stops such as Montreal, Buffalo, Toronto, and the Southern Association. In 1907 he hit .355 for Williamsport.

After baseball he was a manager in a textile mill and worked in a sheriff's office.