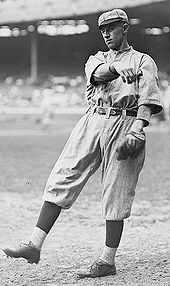 There have been many major leaguers named Butler but Art Butler's real name was Bouthillier, a typically French Canadian name. That is not surprising given he hailed from Fall River, MA, a mill town that had an important French Canadian population by the last decades of the 19th century, when he was born. He played four seasons in the National League during the deadball era, and 14 years in the minors. He had a peak in the minors with the 1921 Kansas City Blues, hitting .368.

Fall River had been a hotbed of early baseball, and he started his pro career playing for the Fall River Indians, where his .267 batting average was highest on the team.

With the Pittsburgh Pirates, he was 14 years younger than teammate Honus Wagner.

This manager's article is missing a managerial chart. To make this person's article more complete, one should be added.
Retrieved from "https://www.baseball-reference.com/bpv/index.php?title=Art_Butler&oldid=1232936"
Categories: