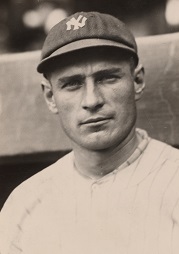 "I took the two most expensive aspirins in history." - Wally Pipp, discussing the events that led to his being replaced by Lou Gehrig at first base for the New York Yankees

First baseman Wally Pipp, who is most famous as the player whom Lou Gehrig replaced in the New York Yankees' line-up, had a 15-year career with three teams. He appeared in three World Series in the early 1920s, led the American League in home runs twice in the dead-ball era, and led the league in triples once.

After playing with the Kalamazoo Celery Pickers of the Southern Michigan League, Pipp reached the majors with the Detroit Tigers in 1913, hitting .161 in a dozen games as a teammate of Ty Cobb and Wahoo Sam Crawford. He also spent time that summer with the Providence Grays of the International League and the Scranton Miners of the New York State League. He went to spring training with the Tigers in 1914 but was optioned to the Rochester Hustlers on April 21st. There, he posted what contemporaneous newspaper accounts described as "in many ways the most remarkable record ever made in a first-class minor league." Pipp led the 1914 International League with 290 total bases on 173 hits including 28 doubles, 27 triples, and a league-leading 15 home runs. Playing 154 games at first base, he batted .314 in 551 at-bats and also stole 26 bases. One of the International League pitchers he faced in 1914 was Babe Ruth, his future Yankee teammate, who pitched with both Providence and the Baltimore Orioles that season. His solid performance earned him a new call-up to Detroit on August 20th, but the Tigers inexplicably never put him into a game the rest of the way. 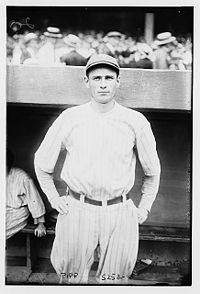 The Tigers continued this disinterest into 1915 but Pipp's 1914 season hadn't gone unnoticed. In late 1914, Colonel Jacob Ruppert and T. L. Huston had acquired the American League's New York franchise, and AL President Ban Johnson had promised the new owners he would assist them in acquiring players to make the franchise, important to the league's economic well-being, competitive. Ruppert and Huston's new manager, Wild Bill Donovan, had managed Pipp at Providence and recommended him. On that advice, the owners negotiated with Tigers owner Frank Navin to acquire Pipp and Hugh High, another minor leaguer. On January 7th, Pipp became a Yankee, " . . . sold at the waiver price ($7,500; another source cites the consideration paid as $5,000) to assist the New York team in playing strength." The Yankees welcomed Pipp, who led the AL in home runs in 1916 and 1917 and was a fixture at first base for New York's World Series teams of 1921, 1922 and 1923. He had possibly his best year in 1924, when he hit .295 with 9 home runs and 110 RBIs while leading the AL with 19 triples.

Famously, Gehrig started at first base in place of Pipp on June 2, 1925 and never relinquished the job after that, not missing a game until 1939. The legend is that Pipp begged out of the line-up because of a mere headache (hence the quote above), but in fact he had been beaned in batting practice the day before and he was suffering the after-effects of a concussion. Gehrig was a top prospect whom manager Miller Huggins was looking to get into the line-up in any case, while Pipp was on the downside of what had been a brilliant career. Pipp's injury opened the door, but Gehrig would have forced it open in short order in any case.

After the 1925 season the Yankees sold Pipp to the Cincinnati Reds where he played through 1928 before finishing with the Newark Bears of the International League (1929-1931).