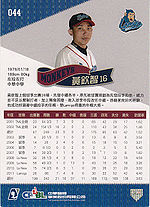 Chin-Chih Huang was the last MVP of the Taiwan Major League.

Huang was the first pick of the Taiwan Major League draft in 2001, going to the Taichung Agan. He made the move pay off, going 7-3 with a league-leading 1.62 ERA (a solid .81 ahead of Yi-sung Li, the runner-up). He was named Rookie of the Year and Finals MVP. He helped Taiwan to a Gold in the 2001 Asian Championship. The lefty had no sophomore slump, as he went 16-2 with two saves and a 1.46 ERA in 2002, setting the league record for ERA. He beat out Koji Muto by .8 for the ERA title. Along with Hiroki Sakai, he combined for 16 strikeouts on March 31 to set a TML team record for whiffs in a game. He won the Gold Glove, the Best Nine at pitcher and the Taiwan Major League Most Valuable Player Award. He was the 5th pitcher to be named TML MVP, but only the second Taiwan native among that group, following Yi-Hsin Chen (American Don August and Japanese Hisanobu Watanabe and Takehiro Ishii had won as well). He would also be the loop's final MVP, as the TML dissolved at year's end. He won a Silver Medal with Taiwan at the 2002 Asian Games.

The Cobras became the dMedia T-Rex in 2008 and Huang asked to move back to the south. He was traded to the La New Bears for Hsiang-Kai Shih. He was 4-3 with a 4.56 ERA in his first season for the Bears. In 2009, the veteran was 1-0 with 3 saves and a 3.26 ERA in 56 games. He was 5th in the CPBL in appearances, between Matt Perisho and Po-Hsuan Keng. The next year, the Kaohsiung native had a 6-3, 3.50 record while being used as a starter regularly for the first time since his surgeries.

Huang was the oldest player on Taiwan's roster for the 2013 World Baseball Classic Qualifiers, about 7 months ahead of Cheng-Min Peng. In his lone outing, in the opener against New Zealand, he relieved Yao-Lin Wang with a 1-0 lead in the 4th, a man on second and two out. He struck out Daniel Devonshire to end the inning. In the 5th, he gave up back-to-back hits to Beau Bishop and Moko Moanaroa. After Max Brown bunted the runners over, Ta-Yuan Kuan relieved. Taiwan went on to a 10-0 rout and would win a spot in the 2013 World Baseball Classic.