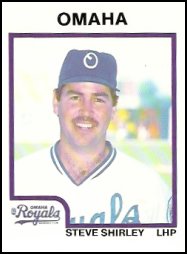 Steve Shirley's father, Ron Shirley, was a minor league pitcher in 1954 and 1955. Steve Shirley finally reached the majors in June, 1982, in his 9th season in the Los Angeles Dodgers organization; he had been a second round selection in the 1974 amateur draft and was a starter until 1980, when he moved to the bullpen halfway through the season. He was never dominating in his early career in the minor leagues, his highest win total being 10 in 1978 (a 10-4 record split between the AA San Antonio Dodgers and the Class-A Lodi Dodgers). His ERAs were constantly in the low 4.00's. He did better after his switch to the bullpen, going 5-3 with a 2.37 ERA with 9 saves in 37 games for the AAA Albuquerque Dukes in 1981. This ERA is even more impressive when the fact that the Dukes played in a hitter's park in a hitter's league is taken into account. He wasn't as sharp in 1982, going 6-2, 4.53 for Albuquerque, but he got his one shot at the major leagues as the Dodgers were struggling with injuries to their pitching staff early in the season. He was 1-1 in 11 appearances during 5 weeks spent in the Show, with a 4.26 ERA, and was released after the season.

Steve Shirley then spent two seasons in Japan, pitching for the Lotte Orions. As a reliever in 1983, he had a very solid year, going 4-4, 3.27 with 11 saves in 37 relief appearances. He moved to the starting rotation in 1984, but didn't fare as well, ending with a 1-3 record and a 4.88 ERA in 13 games, 10 of which were starts. He returned to the USA in 1985, signing a contract with the Pittsburgh Pirates' organization. He started the year at AAA Hawaii, but fared poorly, with a 3-5, 4.56 start; he was sold to the Detroit Tigers on June 27th and was assigned to AA Nashville, where he compiled a 3-2 record and a 3.61 ERA in 21 relief appearances. This was not going to earn him a ticket back to the majors, and he became a free agent again, returning to the Dodgers' organization. He spent a year in the bullpen at Albuquerque in 1986, going 4-8, 3.28 with 15 saves and 71 strikeouts in 74 innings, but did not get a major league call-up. He then moved to the Kansas City Royals' organization in 1987, pitching for the Omaha Royals. The story remained the same: good results (4-2, 3.87 and 78 K's in 79 innings), but no call-up. He moved to the Montreal Expos in 1988, couldn't make the team in spite of an invitation to spring training, and spent the year with the Indianapolis Indians, posting a 2.86 ERA and 9 saves in 35 relief appearances.

Steve Shirley is now a manager in the Independent Leagues. He managed the Sioux City Explorers of the Northern League in 2005 and has been manager of the Sioux Falls Canaries and Sioux Falls Pheasants of the American Association since 2007. Between the two, he served as pitching coach of the Winnipeg Goldeyes.