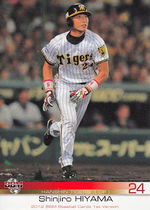 Shinjiro Hiyama played for 22 seasons in Nippon Pro Baseball and was a three-time All-Star.

Hiyama is third-generation Korean-Japanese; his Korean name is Chin-hwan Hwang. He is not a Japanese citizen and said he has no intention of naturalizing due to Japan's unusual immigration laws. Hiyama won a batting title his sophomore year of college. The Hanshin Tigers took him in the 4th round of the 1991 draft.

The Kyoto native made his first CL All-Star team in 1997. In the first 1997 NPB All-Star Game, he replaced Shinjo in the batting order while Hideki Matsui moved from CF to RF so Hiyama could play RF. Hiyama got a hit off Yasuyuki Kawamoto in his lone at-bat, the last of 5 CL hits in a 5-0 loss to the Pacific League. He replaced Atsunori Inaba in right field in Game 2 and went 1 for 2 with a run in a 6-3 win, his hit coming off Takashi Ishii. He finished the game in LF; when Shinjo entered in CF, Matsui moved from CF to RF and Hiyama from RF to LF, replacing Takanori Suzuki there. For the 1997 season, he hit .227/.333/.425 with 23 home runs and 82 RBI, drawing 68 walks but fanning in 150 of 466 AB, while fielding .992. He again led Hanshin in home runs and RBI. He made the CL leaderboard in triples (5, tied for 4th with Yutaka Wada and Ogata), dingers (8th, between Akira Eto and Katsumi Hirosawa), walks (tied for 8th with Kazuhiro Kiyohara), strikeouts (2nd, 2 behind Kiyohara) and sacrifice flies (7, tied for 6th).

Hiyama got a break in 2001 when Shinjo left for the US and Tarasco was not retained. He went on to set a Hanshin record with a 28-game hitting streak (Matt Murton topped the mark 10 years later). He batted .300/.355/.448 for the year, showing improved contact if not as much power as he had in 1996-1997 - he had 12 homers. He also cut his strikeouts to 62 that year, indicating he had adjusted his approach at he plate significantly, aiming for more contact and less pop. He just missed the CL top 10 in average (.002 behind Takahiro Saeki).

Reaching 1,000 career games during 2003, he made his last All-Star team. He moved to first base early in the year to make room for the newly-acquired Tomoaki Kanemoto, but finished up starting again in RF when Osamu Hamanaka was injured. In the 2003 NPB All-Star Game 1, he started at 1B and hit 7th, going 0 for 2 before Tyrone Woods succeeded him in a 4-4 tie. In Game 2, he started in CF and hit 7th in a 5-3 win. He was 0 for 2 for the 4th straight All-Star Game, with Yoshinobu Takahashi replacing him in the field and Fukudome in the batting order. On July 2, he hit for the cycle, the 4th Hanshin player ever to do so and the first since Akinobu Mayumi in 1979. For the regular season, he batted .278/.338/.459 with 16 home runs and 70 runs. He no longer had to be the sole Hanshin threat as he had been in his first peak, as Kanemoto and Arias led the charge and Hiyama could play a solid supporting role. As a result, Hanshin won the first CL pennant of his career and proceeded to the Japan Series. In the 2003 Japan Series, he hit .222/.250/.370 but this was actually better than the Hanshin team OPS. He took Toshiya Sugiuchi deep for their lone run in game 6 and Hanshin dropped the Series in 7 to the Daiei Hawks.

He has been active in many charitable causes. After his playing career ended, he became a baseball commentator with Asahi Broadcasting.