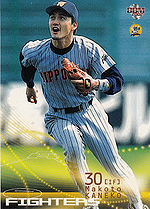 Makoto Kaneko was a third-round draft pick of the Nippon Ham Fighters in 1993. He debuted in Nippon Pro Baseball in 1995, going 2 for 6 with a double. His first hit came off Kazuyuki Ono.

By 1996, the 20-year-old had won the starting second base job for Nippon Ham, hitting .261/.307/.337 with a team-high 15 steals in 17 tries. He led the Pacific League in sacrifice hits (38) and was named the PL Rookie of the Year. Oddly, the Central League Rookie of the Year, Toshihisa Nishi, had gone to the same high school as Kaneko.

Makoto's batting line in 1999 was .274/.336/.351. He won another Gold Glove after fielding .988 and leading the league's second basemen. He was named to the Best Nine, beating out So Taguchi most notably.

Kaneko played for Japan in the 2004 Olympics. He was 0 for 2 with a walk and two runs as a defensive backup on the infield behind 3B Norihiro Nakamura, SS Shinya Miyamoto and 1B Michihiro Ogasawara.

He is married to sportscaster Seika Shiragi.