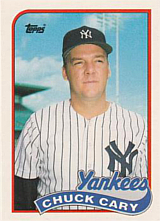 Cary was a member of the California Bears who played in the 1980 College World Series, going 1-0 and leaving a semifinal game against Arizona with a lead. He was drafted by the Detroit Tigers in the 7th round in 1981 and spent the year in the South Atlantic League with the Macon Peaches. He appeared in 13 games, pitching 87 innings, going 5-5 with a 2.59 ERA. Chuck would spend the next two years pitching for the Evansville Triplets, Birmingham Barons and Nashville Sounds before he was brought up to the majors by the Tigers in 1985. He spent the last month of 1985 and all of 1986 with the Tigers but was traded, on January 27, 1987, along with Randy O'Neal, to the Atlanta Braves for Terry Harper and Freddy Tiburcio. He was with the Braves in 1987 and 1988 but was released on December 4, 1988. On January 26, 1989 he signed with the New York Yankees.

Cary stayed with the Yankees from 1989 through 1991 and was released on October 28, 1991, following elbow surgery in September. In 1992, Chuck was 3-5 with a save and a 3.61 ERA in 19 games for the Yomiuri Giants. He returned to the major leagues in 1993 when he signed as a free agent on January 8th with the Chicago White Sox. Chuck's last games were in the 1993 Midwest League with the South Bend White Sox. He was 1-1 while appearing in 8 games.

Chuck appeared in 134 big league games, pitching 410 1/3 innings with a 14-26 record and 4.17 ERA. He never had the luxury of playing for a winning team. When asked about it in an interview on the MSG Network, he simply stated: "All of these teams are winners. They are the best in the world and I get to play on them. Explain to me the downside please?" Chuck spent a total of thirteen seasons in baseball, with a 41-51 record and 4.21 ERA in the minors, appearing in 243 games and pitching 789 innings.

Cary ended his career in order to travel less and spend time with his family. He spent five years as the Executive Director for Playground Destination Properties, and in 2009 was the President/CEO of Sea Sotheby's international real estate. In his real estate career, Chuck has been responsible for the development, sales and marketing of almost $15 billion in real estate.