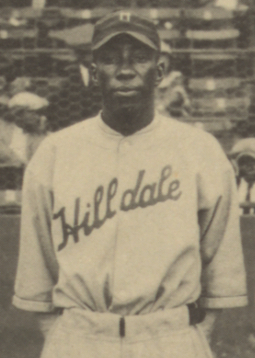 Currie at the 1924 Negro World Series.

Rube Currie was a top Negro League pitcher of the early 1920s who appeared in all four Eastern Colored League-Negro National League editions of the Negro World Series. He was noted for his curveball and his control. His name was spelled Curry by contemporary sources but historians invariably refer to him as Currie.

Currie grew up playing alongside Newt Allen and Frank Duncan. He began his career with the 1919 Chicago Unions, a minor team. In 1920, he was 12-13 for the Kansas City Monarchs but his 122 strikeouts tied Sam Crawford for second in the Negro National League behind Bullet Joe Rogan. On September 27, he threw a 15-inning 1-1 tie against Dicta Johnson.

Currie spent the winter with the Los Angeles White Sox and was 12-4 with only 20 walks in 154 innings. He led the California Winter League in games pitched (18), complete games (17), wins and innings pitched. With Kansas City in 1921, Currie improved slightly to 14-11. He walked 41 in 189 innings and led the NNL with 30 games pitched.

The tall curveball artist was 15-9 with 3 saves and a 3.24 RA in 1923. He also hit .242. He tied Andy Cooper and Huck Rile for second in the NNL in wins, one behind Rogan. His 119 strikeouts were second to Rogan, as were his 18 complete games. He tied Rogan and Bill Force for second in saves, behind Cooper. John Holway rates him as the best pitcher in the NNL that year.

In the winter of 1923-1924, Currie wnet to Cuba, where he was 8-2 for the legendary Santa Clara Leopards, considered arguably the best winter league team ever. Currie remained for the second season in Cuba that winter, going 2-3 for Santa Clara.

Back in the United States, Rube moved to the Hilldale Club and struggled to a 1-6 finish with a 5.43 ERA. He was better in the 1924 Negro World Series. In game four, he came out of the bullpen and beat Cliff Bell and his old Kansas City teammates, 4-3. In game eight, he lost 3-2 to Rogan when Biz Mackey, Judy Johnson and Louis Santop all made crucial defensive mistakes in the bottom of the 9th to blow a 2-0 lead. He was 1-1 with a 0.83 RA in the Series.

Rube returned to California for the winter but was just 5-4 for the Philadelphia Royal Giants. Currie began the 1926 season as a hold-out, eventually signing with the Chicago American Giants. He was 8-4 with a 2.44 RA, third in the NNL. He threw a no-hitter against the Dayton Marcos and walked none but lost a perfect game due to an error by his team. Currie was 2-0 with a 0.95 RA in the playoffs, again beating his old Monarch teammates. In the 1926 Negro World Series, he again got the call for game one. After 3 runs in 7 1/3 innings, he was relieved by Bill Foster in what wound up as a 3-3 tie. In game five, he lost a 7-5 contest. In game nine, he came back to beat the Atlantic City Bacharach Giants with Chicago on the verge of elimination. They went on to win the Series. Currie was 1-1 with a 5.06 RA.

Currie coached for the East in the 1936 East-West Game

This biographical article is missing the person's: death date
Retrieved from "https://www.baseball-reference.com/bpv/index.php?title=Rube_Currie&oldid=901783"
Categories: