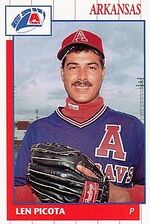 Len Picota has gone by multiple names throughout his career, whether it be his full name (Lenin), or two shortened versions (Len or Leny). Picota has pitched professionally for over 20 years. Picota is a cousin of Luis Iglesias. His father, Rene Picota, was a scout.

Picota was a starting pitching prospect in the St. Louis Cardinals farm system who got as high as AAA but never reached the Majors. He was signed as a free-agent on December 18, 1983. He broke in with the 1984 Johnson City Cardinals, going 3-5 with a 4.44 ERA. Starting off on an inauspicious note, he led the Appalachian League with 81 hits allowed that season. Picota walked 36 in 46 1/3 innings for the 1985 Erie Cardinals and went 3-5 with a 6.22 ERA, posting the second-worst ERA of any New York-Penn League pitcher with at least five decisions that year.

1988 was also a good season for him. With the St. Petersburg Cardinals, he went 11-10 with a 2.89 ERA in 143 innings. He only gave up 130 hits that year, and he only struck out 65 batters. Apparently, he was not a strikeout pitcher. The Florida State League was a low-scoring circuit and Picota was not near the top 10 in ERA.

In 1992, the 25/26-year-old signed with the Montréal Expos, for whom he starred as a closer with the Harrisburg Senators. He went 4-3 with a 1.88 ERA and led the Expos minor leaguers with 26 saves. He allowed 56 hits only in 72 innings over 53 games. He led the Eastern League in saves and struck out all three batters he faced in the AA All-Star Game. He had a 2.30 ERA in 22 games for the Tigres de Aragua in the 1992-1993 Venezuelan League season.

Picota made his first trip to the Chinese Professional Baseball League in 1994 with the Mercury Tigers, going 1-4 with 6 saves and a 3.55 ERA. The next year, he was 8-8 with two saves and a 3.99 ERA for the Tigers.

Picota joined the Guerreros de Oaxaca and had a 6-5, 3.66 record for them.

During the 1999 Pan American Games, Picota was 0-1 with a 3.60 ERA in two outings. He took the loss to Team USA that knocked Panama out of contention for making the 2000 Olympics; a homer by Craig Paquette in the 5th was the key shot.

After 8 years away, Picota returned to the Expos briefly in 2001, joining the club in spring training but being released before Opening Day. Amazingly, for a player of his resume, he had never before been in the independent leagues, but he fixed that by joining the Nashua Pride for 2001. He had a huge year, going 15-2 with a 3.04 ERA and 161 K in 160 IP, walking 50 and allowing 141 hits. He was fourth in the Atlantic League in ERA and won Pitcher of the Year honors. He led the league in both wins and strikeouts by large margins.

Picota moved to the Korea Baseball Organization in 2002. He was 6-6 with 14 saves and a 3.51 ERA for the champion Samsung Lions. In the 2002 Intercontinental Cup, he had a 1.80 ERA for Panama, which finished third before being stripped of its Bronze Medal due to positive tests for banned substances by several players. In his native Panama for the briefly rejuvenated Panama League, he was 6-1 with a 2.31 ERA in winter league play. He led the last-place Azuero Macheteros in ERA and wins. He then went 2-6 with 15 saves and a 3.86 ERA for the Hanwha Eagles in 2003.

In the 2003 Baseball World Cup, Picota went 3-1 with a 2.08 ERA. He had a loss in the Gold Medal game to Cuba but tied Norge Vera and Rafael Medina for the tourney lead in wins and threw a 3-hit shutout against Nicaragua in the quarterfinals. It was the first Silver Medal Panama got in the history of the Baseball World Cup.

Seven years after his last stay in Taiwan, Picota returned for his 22nd season in pro baseball. He went 16-8 with two saves and a 2.16 ERA for the Sinon Bulls. He finished third in the CPBL in ERA and led the league in wins. In the 2005 Taiwan Series, he excelled in the opener against the Makoto Cobras after allowing only one run in eight in a no-decision; Sinon won in 10. In game four, he allowed one run in six to pick up another victory and complete the sweep. He lost the MVP award to teammate Chun-Chang Yeh. Surprisingly, Sinon waived both Picota and all-time CPBL win leader Osvaldo Martinez after the season.

Len represented Panama in the first World Baseball Classic and got the start against Puerto Rico. He allowed only one hit and no runs in his first four innings against the favored club, walking two and fanning two, but Alexis Rios opened the 5th with a home run to drive Picota from the mound. He had the lowest ERA of any Panamanian starting pitcher in the WBC that year, as his 2.25 mark was 1.35 lower than the next-best, Bruce Chen.

Picota was with Team Panama in the qualifiers for the 2008 Olympics but went 0-2 with a 5.25 ERA and four homers allowed and Panama missed it; they just did qualify for the 2007 Pan-American Games and 2007 Baseball World Cup in the tourney.

Picota pitched three innings for Panama in the 2007 Pan-American Games, allowing four baserunners, striking out two and allowing two runs, both unearned. He also pitched in Mexico for part of the season. He also pitched for the Rieleros de Aguascalientes of the Mexican league, going 1-2 with a 6.40 ERA in 7 starts.

In late 2008, Taiwanese investigators discovered that Picota had played a role in recruiting foreigners willing to throw games for the dMedia T-Rex.

Picota pitched in Nicaragua in the early and mid-2000s, once throwing a no-hitter for the Tigres de Chinandega. He now runs Picota Sports and Picota Baseball Academy in Panama City, and works for the Panamanian Sports Institute.