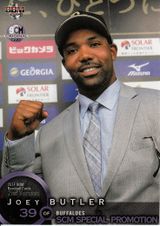 Joey was having a third straight solid season for the Express (.290/.375/.437, 54 runs scored after 97 games) in 2013 when he was called up after Nelson Cruz was suspended for 50 games for his involvement in the Biogenesis Laboratories scandal. In his major league debut for the Rangers on August 7th, he pinch-hit for Leonys Martin in the 9th inning of a 10-3 romp over the Angels. Facing Nick Maronde, he lined out to Grant Green. He appeared in 8 games at the big league level, going 4-for-12 with a pair of doubles. He was placed on waivers after the season and picked up by the St. Louis Cardinals. In 2014, he started the season in the minors with the Memphis Redbirds, where he hit .360 in 31 games. He was also with the Cardinals for a week, going 0-for-5, and was released on May 23rd. He joined the Orix Buffaloes of Japan's Pacific League, hitting .231 in 21 games with 2 homers and 6 RBI. He then signed with the Tampa Bay Rays as a free agent in January 2015 and began the year back in AAA with the Durham Bulls. He hit .317 in 21 games, then was called up to Tampa Bay and received his first extended opportunity to play at the major league level. On July 1st, he broke up a no-hit bid by Carlos Carrasco of the Cleveland Indians with two outs and two strikes in the 9th inning when he lined a pitch over second baseman Jason Kipnis' head, driving in Asdrubal Cabrera, who had reached via walk, from second base. The Rays still lost the game, 8-1. Joey finished his big league career with 102 games over three seasons, hitting .274/.330/.412 with 8 home runs and 31 RBI.