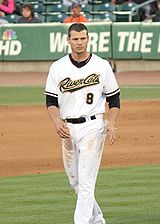 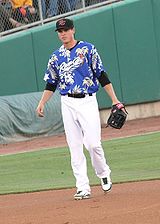 Green batted .316/.388/.491 as a freshman, starting at shortstop for the University of Southern California. He set a school record with 10 triples. He was named Pacific-10 Conference Co-Freshman of the Year with Gabe Cohen. In the summer, he batted .291/.362/.449 for the Yarmouth-Dennis Red Sox of the Cape Cod League. He was 5th in the circuit with 11 steals. Baseball America rated him the #18 prospect in the Cape Cod League.

Green was picked for the USA team in the 2010 Futures Game. He entered as a backup to Dee Gordon at shortstop but would later switch spots with 2B Danny Espinosa. In his first at-bat, against Trystan Magnuson, he singled home Desmond Jennings. He grounded out versus Eduardo Sánchez his other time to the plate. For the season, he dazzled for Stockton, hitting .318/.363/.520 with 39 doubles, 6 triples, 20 home runs, 107 runs and 87 RBI. In the postseason, he was 3 for 9 with a double and two runs for the Ports then 3 for 22 with two home runs for the Midland RockHounds. He was among the California League leaders in runs (tied for third with Marc Krauss), hits (174, 2nd, 8 behind Kyle Seager), doubles (3rd behind Paul Goldschmidt and Seager), extra-base hits (tied for third, trailing only Goldschmidt and Johermyn Chavez), RBI (tied for 9th with Krauss), total bases (285, 3rd behind Goldschmidt and Chavez), slugging (5th, between Albert Cartwright and Brandon Barnes), average (7th, between Cartwright and Jimmy Cesario), errors at SS (37, 1st) and OPS (8th). He joined Goldschmidt (1B), Seager (2B) and Stephen Parker (3B) as the Cal League All-Star infielders. Among A's farmhands, he led in average, runs, hits, doubles and total bases and was third in slugging. Baseball America named him as the league's third-best prospect, after Mike Trout and Brandon Belt, and as Oakland's top prospect. He hit .200 in the Arizona Fall League.

Back in the US team for the 2011 Futures Game, he won the Larry Doby Award as the game's MVP. He lined an RBI double off Martin Perez as a pinch-hitter in the 5th inning, then led off the 8th with a double off Kelvin Herrera and came around to score the tying run. During the regular season, he produced at a .291/.343/.408 clip with 33 doubles and 76 runs for Midland. He moved from shortstop to center field in July. For the year, he was among the Texas League pacesetters in hits (154, 2nd, 7 behind Tim Wheeler), average (10th) and doubles (3rd, trailing only Luis Jimenez and Ryan Jackson). In the A's chain, he was tied for second with Adrian Cardenas in hits (behind Jermaine Mitchell) and third in doubles (one behind Matt Carson and Josh Whitaker). He made the TL All-Star team as a utility man. He was 8 for 27 with 2 doubles and 4 RBI in the playoffs for the Sacramento River Cats, then hit .290 with 9 doubles and 5 home runs for Phoenix, tying for 4th in the AFL in doubles. Baseball America rated him as Oakland's #6 prospect and as the TL's #11 prospect, between James Darnell and Wheeler.

The A's were developing him to be a utility player in the big leagues at that point, as after the season he was sent to the Arizona Fall League for the third straight season, with the mission of learning to play second base. He had earlier played in left field and center field, and then at third base and at shortstop, and being proficient at all of these positions was likely to be the key to breaking into The Show.

He started 2013 on the right foot, as he was hitting .318 with a .374 OBP, .500 slugging percentage and 11 homers, 25 doubles and 49 RBIs after 81 games for Sacramento. He was playing second base full-time. On July 8th, the Athletics gave him the long-awaited call to the big leagues. He went 0 for 3 with a pair of strikeouts starting at second base against the Pittsburgh Pirates that day. He flew out against Jeff Locke in his first major league at-bat. Eric Sogard replaced Green as a 9th-inning defensive sub. He played 5 games for the A's but went 0 for 15 with 6 strikeouts before being sent back down to the minors. On July 30th, he was traded to the Los Angeles Angels of Anaheim in return for Alberto Callaspo.