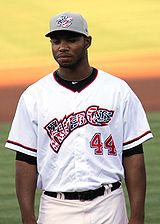 The son of Jesse Barfield and brother of Josh Barfield, outfielder Jeremy Barfield was selected by the New York Mets in the ninth round of the 2006 amateur draft but attended college rather than sign. He was then chosen by the Oakland Athletics in the eighth round of the 2008 amateur draft and made his pro debut that summer with the Vancouver Canadians.

Climbing the A's minor league ladder slowly, he reached AAA with the Sacramento RiverCats in 2013, but only as a back-up infielder. In July of that year, the A's decided to convert him to pitcher in order to take advantage of his powerful left arm. He was sent back to the Arizona League to start over at age 25. He was hitting only .188 at the time. He is to make his professional pitching debut in 2014. In 2014, he went 4-1 with a 4.42 ERA in 25 relief appearances, striking out 43 batters in 36 2/3 innings, while walking 28 batters. He also hit .261 in 142 at-bats.

Barfield is particularly close to his father's former teammate, Hall of Famer Rickey Henderson, who has long treated the young Barfield as the son he never had and has served as mentor to him throughout his life.