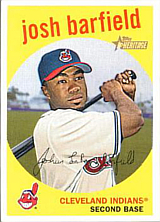 Barfield made the major leagues in 2006. As the Padres' regular second baseman, he hit .280/.318/.423 with 13 homers and 58 RBI and stole 21 bases in 26 tries. After his rookie year, he was traded to the Cleveland Indians for infielder Kevin Kouzmanoff and reliever Andrew Brown. He started 2007 as the starting second baseman, but lost the job to Asdrubal Cabrera in August. He spent the next two seasons going back and forth between Triple A and the Tribe and was removed from the 40 man roster in August 2009. Josh called it quits after spending the 2013 season with the Long Island Ducks of the Atlantic League. David Wells was the only big leaguer to play with both Josh and Jesse Barfield.

Following his playing career, he remained active in baseball, first as a scout, and eventually as the Director of player development for the Arizona Diamondbacks, starting in 2019. he had previously worked as the assistant to Mike Bell and replaced him when Bell, who he considered his mentor, left to work for the Minnesota Twins before passing away from kidney cancer.