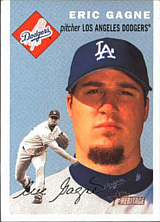 Éric Gagné is one of two Canadian pitchers to win the Cy Young Award; Hall of Famer Ferguson Jenkins is the other. Born in Montréal, QC, he grew up in the northern suburb of Mascouche, QC where he played both hockey (he was a defenseman known for his physical style of play) and baseball. He attended high school in Montreal and then went to Junior College in Oklahoma. He was drafted in the late rounds of the 1994 amateur draft by the Chicago White Sox but did not sign, then signed with the Los Angeles Dodgers as a free agent the following summer.

Now the top pitching prospect in the Dodgers organization, it was just a matter of time until Gagné earned a permanent spot in the major league team's starting rotation. He started 2000 in AAA Albuquerque but was dominant in 9 starts, going 5-1 and striking out 59 batters in 56 innings. He had more trouble in the National League, as his record was only 4-6, with an ERA over 5.00, in 19 starts. Gagné split 2001 between AAA Las Vegas and Los Angeles, improving to 6-7, 4.75 in the majors; in AAA, he showed that he had nothing left to prove, posting 3 wins in 4 starts with an ERA of 1.52.

It seemed at that point that Eric Gagné was ready to settle in as a full-time member of the Dodgers starting rotation, but fate intervened. His manager in spring training of 2002, Jim Tracy, decided to make him his closer. To say that he took well to his new job would be a major understatement. From 2002-2004, he managed to pitch exactly 82 1/3 innings in each of the three years. During that stretch, he was the most dominating relief pitcher in the majors, saving 52 games with an ERA under 2.00 the first season, then turning in one of the greatest seasons ever by a relief pitcher in 2003. He saved 55 games in 55 opportunities to lead the National League, allowed a mere 37 hits for the season, and struck out 137 batters while walking only 20. He earned the nickname "Game Over", as he was almost untouchable when he stepped on the mound. With his hulking physique, unkempt hair, black goatee and goggles, he was an extremely intimidating presence on the mound, and a favorite of Dodger Stadium fans. He was voted the winner of the National League Cy Young Award in 2003, while making the All-Star team for the second of three consecutive years. His success continued into 2004, when he saved 43 games while going 7-3, 2.19. He pitched in the postseason for the first time in his career, allowing 1 hit in 3 innings of work in the NLDS.

Gagné's run of God-like dominance ended early in the 2005 season. He hurt his knee in spring training, tried to come back too early, then hurt his arm. Originally having been disabled in June, he underwent season-ending surgery that year. Following an ill-fated comeback with the Dodgers in early June, 2006, he was granted free agency on October 30. He signed with the Texas Rangers on December 19 and did well in the first half of 2007, registering a 2.16 ERA, with 16 saves. 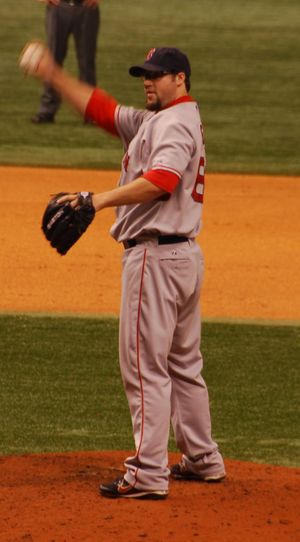 On July 31, 2007, Gagné was dealt to the Boston Red Sox for Kason Gabbard, David Murphy and Engel Beltre as Boston tried to bolster its bullpen for the stretch run. He joined All-Stars Jonathan Papelbon and Hideki Okajima in the Boston bullpen. However, he pitched very poorly, posting a 6.75 ERA in 20 games, with no saves. He gave up one run in his sole inning of work in the ALDS and was charged with a loss in extra innings against the Cleveland Indians in the 2007 ALCS. He did pitch one scoreless inning in the 2007 World Series in which the Red Sox swept the Colorado Rockies.

Having again been granted free agency by Boston on October 31st, he was signed by the Milwaukee Brewers on December 10th and subsequently began the 2008 season as the team's closer. He had a rough offseason, as his name was mentioned in the Mitchell Report as someone around whom rumors of steroids use were rampant. He acknowledged having used human growth hormone and later apologized to fans in his authorized biography, published in French in 2012. He revealed that steroid use was rampant in the Dodgers' dugout at the time, with up to 80% of players using. Indeed, a number of teammates from that period were mentioned in the Mitchell Report, received suspensions, or were later investigated by Major League Baseball. He explained that he first took HGH to help him get over his 2005 knee injury, but that in the long run, the drugs probably shortened his career by 4 or 5 years, because "I was living my life at an accelerated pace; my joints were getting older faster than my heart or my desire to play."

Pitching for Milwaukee in 2008, he was demoted to a less demanding role after a few well-publicized blown leads early in the season, and spent some time on the disabled list while struggling when he did take the mound, posting an ERA over 6.00. Salomon Torres took over as closer, as the Brewers surged in the NL Wild Card race. He did pitch a scoreless inning in the NLDS. A free agent after the season, he tested the market but decided to re-sign with the Brewers, as no other team was willing to take a chance on a pitcher whose best days were clearly behind him. The team announced in spring training of 2009 that Gagné would need some time to rehab on his own and released him. He decided to go back home and sign with the independent Capitales de Québec of the Can-Am Association. He had a so-so season, being shelled in his first outings, but improving gradually, until he pitched his best game of the season in the Championship series which Quebec won over Brockton. Still, his fastball was nowhere near what it once had been, and he struggled with his command.

In 2010, Gagné received an invitation to try out with the Dodgers once again. He went to spring training but failed to make the team. He declined an assignment to the minor leagues, hoping that another major league team would give him a shot. When that failed to materialize, he announced his retirement on April 19th.

He was a minority owner of the Aigles de Trois-Rivières in the minor league Can-Am Association and also has ownership shares in the B45 bat manufacturing company. He also helped finance the film Spaceman, a biography of pitcher Bill Lee and played a small cameo role as a bartender in the movie. In 2015, he decided to make a one-game comeback with Trois-Rivières. He was originally scheduled to start a home game on June 28th, but the game was rained out. His performance was re-scheduled for August 28th, against his old team, les Capitales de Québec. The following year, on September 5th, he came out of retirement to make a start for the Ottawa Champions against Quebec on the last day of the season. He was satisfied with the results of these one-off outings, and the following winter worked out in order to be able to finally pitch for his home country in the 2017 World Baseball Classic. He was successful as he made the national team's roster and was impressive in his lone appearance, pitching three innings against the Colombian national team and registering well over 90 mph on the radar gun. He was also in spring training with the Dodgers as an instructor and explained that the idea of making a comeback at the major league level was still in the back of his mind. On May 4th, it was reported that he was on the brink of signing a contract with the Long Island Ducks of the Atlantic League. He made 5 appearances for the Ducks, going 0-2, 12.27 before calling it quits, likely for good.

He resurfaced in the news just before the 2018 World Series, which ironically featured two of his former teams, the Dodgers and Red Sox. A long-time friend of Red Sox manager Alex Cora, he realized while watching the games from his home in Montréal that closer Craig Kimbrel was tipping his pitches, which explained his struggles through the first two rounds of the postseason. He immediately informed Cora, and pitching coach Dana LeVangie worked to correct the flaw before Game 5 of the ALCS. He was working as a minor league pitching instructor for the Texas Rangers at the time, and in 2019 was named bullpen coach for the AAA Nashville Sounds, the Rangers' top affiliate.

He was the Dodgers' all-time save leader with 161 until passed by Kenley Jansen in 2016; Jeff Shaw had been the previous record holder, with 129, a total Gagné had surpassed in 2004. In his first year of eligibility for the Hall of Fame in 2014, he received only 2 votes (0.4%) and dropped off the ballot.

Gagné served as the AZL Rangers pitching coach in 2018 and the bullpen coach for the Nashville Sounds in 2019.