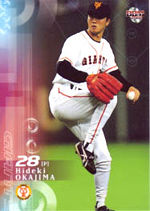 Hideki Okajima pitched for 12 years in Nippon Pro Baseball (making three All-Star teams) before signing with the Boston Red Sox in the 2006-07 off-season.

Hideki joined the Yomiuri rotation in 1997. At 21 years of age, he went 4-9 but with a 3.46 ERA. He struck out 102 in 109 1/3 innings and allowed 92 hits but walked 56. Despite the worst record of the starters, he tied Hiromi Makihara for second on a strong staff in ERA, beating out long-time stars like Masumi Kuwata and Masaki Saito.

On March 24, 2006, Hideki was traded to the Hokkaido Nippon-Ham Fighters for Shigeyuki Furuki and Kazunari Sanematsu. Okajima put on a strong show with Nippon Ham, with a career-low 2.14 ERA, a 2-2 record, 4 saves and 63 K in 54 2/3 IP while walking 14 in 55 games. Known previously for looking at the ground during his delivery, he adjusted his approach, which some felt led to his improved control. In four games in the 2006 Japan Series, he allowed no hits or runs in 3 2/3 IP, walking two and striking out three to earn his third ring.

After the season, Okajima signed with the Boston Red Sox. His wife Yuka Kurihara (a TBS-TV announcer) had lived in the States and wanted their kids to be raised bilingually, which was a factor in Hideki's decision to come to the USA to play.

Okajima's first MLB pitch with the Red Sox, on April 2, 2007 was launched for a home run by the Royals' John Buck. He recovered and allowed only four hits and no runs in his next 12 2/3 IP, while striking out 17. That earned him the Rookie of the Month Award in the AL, finishing ahead of another Japanese player, Akinori Iwamura. Okajima was 3-2 with 5 saves and a 2.22 ERA as a rookie, outperforming Boston's much more high-profile Japanese acquisition, Daisuke Matsuzaka. Okajima allowed only 50 hits and 17 walks in 69 1/3 innings while striking out 63. He then had a 2.45 ERA in 8 games in the postseason. He was picked for the 2007 All-Star Game but did not play.

Okajima again stole the limelight from Matsuzaka on the 2008 Opening Day, pitching a scoreless 9th for victory in the Tokyo Dome over the Athletics. He became the first Japanese player to get a win in a Major League Baseball game played in Japan. He had another good season, going 3-2, 2.61 in 64 games and striking out 60 batters in 62 innings. He was outstanding in the ALCS against the Tampa Bay Rays, giving up only one hit and one walk in 7 1/3 innings. In 2009, he was 6-0, but did not record a save and saw his ERA climb to 3.39 in 68 games. As the season advanced, young Daniel Bard eclipsed him as the primary set-up man for closer Jonathan Papelbon, and he was only pitching in non-pressure situations by the end of the year. Thus, he only faced one batter in the ALDS, when Boston lost to the Los Angeles Angels of Anaheim.

After five seasons with the Red Sox, Okajima was designated for assignment on May 19, 2011. He had a 1-0 record with a 4.32 ERA in 7 games at the time, after starting the season with the AAA Pawtucket Red Sox, where he had given up just 2 hits and no runs in 5.2 innings. The decision was more of a reflection on his difficulties in 2010, when he had given up 59 hits and 20 walks in only 46 innings. His 4-4, 4.50 record that season masked how much he had struggled on the mound. With his velocity well down from his rookie season, and having reached his 35th birthday, the Sox considered that he had little chance of ever regaining enough effectiveness to be more than a back-of-the bullpen pitcher by this point of his career. He finished the year at Pawtucket pitching quite well, as his record was 8-1, 2.29 in 34 games, with an excellent K/W ratio of 48/9. It was enough to convince the New York Yankees to sign him to a minor league contract after the season and invite him to spring training in 2012. However, he failed a physical exam, which voided the contract.