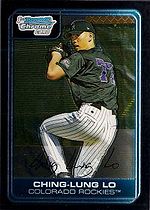 Ching-Lung Lo has pitched in the minors (peaking at AAA) and the Chinese Professional Baseball League.

Lo was signed out of high school by scout Kent Blasingame for the Colorado Rockies for $1.4 million. He debuted as a pro in 2002 with the Casper Rockies, going 5-5 with a 4.95 ERA and .290 opponent average as the young man on the staff. Baseball America rated him as the #13 prospect in the Pioneer League, between Jonathan Broxton and Ubaldo Jimenez among pitchers. They also ranked him as the #14 Colorado prospect entering 2003.

Ching-Lung improved his record to 10-5 in 2006 with the Modesto Nuts but his ERA remained elevated at 5.39. He spent 2006 in the Hawaii Winter League, going 4-3 with a 4.97 ERA for the Waikiki BeachBoys. He led the staff in wins but his ERA was 4th-highest among the five starters. It was an international rotation, featuring Dutch hurler Rick Vanden Hurk, Japan's Atsushi Nohmi, Mexican Marco Estrada, Taiwan's Lo and an American in the 5th slot.

He debuted for Taiwan's national team in the 2010 Intercontinental Cup. He closed four of his 4th-place team's contests. He tossed one shutout inning with a hit to Jakub Sládek in a win over the Czech national team, allowed a hit and fanned one in 1 1/3 IP to end a 2-0 loss to Cuba (relieving Chih-Lung Huang, he allowed an inherited run to score on a Yulieski Gourriel hit). He allowed one hit in one inning to wrap up a 12-5 win over Japan. With a spot in the Gold Medal game at stake, he replaced Huang in the 9th with one out and two on against the Dutch national team, the game tied at 2. He promptly got Shaldimar Daantji to hit into a twin killing. In the 10th, though, one run scored on a Chih-Kang Kao passed ball, then Didi Gregorius cracked a game-winning two-run homer. He tied for second in the event in appearances, two behind Kamolphan Kanjanavisut.

Lo ended his time in the Rockies chain where he had been 8 years prior, with the Dust Devils; he was 2-1 with a 6.59 ERA and 10 walks in 13 2/3 IP. In the 2011 Baseball World Cup, he made three appearances. He was rocked for four runs in one inning in Taiwan's 14-8 loss to Panama, gave up one unearned run in 3 innings in his club's 3-1 loss to Japan and tossed 1 2/3 shutout innings as they beat Puerto Rico. He remained in America for 2012, going 1-0 with a 5.36 ERA in 37 games for the independent Lancaster Barnstormers. His 9 hit batsmen tied for 4th in the Atlantic League.

In the 2013 World Baseball Classic, he pitched twice. In a 3-2 loss to South Korea, he relieved Ching-Ming Wang in the 6th with a 2-0 lead. He struck out Hyun-soo Kim, retired Jun-woo Jeon, gave up a single to Jung-ho Kang and K'd Min-ho Kang. In the 7th, he retired Sang-soo Kim, Yong-kyu Lee and Keun-woo Jeong in order. Major leaguer Hong-Chih Kuo relieved in the 8th and blew it. In his other outing, he got the start in a 14-0 loss to powerful Cuba. He allowed a single to José Miguel Fernández and homer to Frederich Cepeda in the first but allowed no more runs before Yao-Hsun Yang relieved with two outs in the third; he wound up as Taiwan's most effective hurler that day, though he took the loss.

Going to his homeland's top league for the first time, he was drafted by the Uni-President Lions in the first round. The third overall pick, he followed former major leaguer Chin-Lung Hu and fellow minor leaguer Hung-Wen Chen. He went 10-4 with a 3.65 ERA, finishing among the 2013 CPBL leaders in wins (tied for 3rd with Sung-Wei Tseng, Nelson Figueroa and Yu-Ching Lin). He would have been 5th in ERA had he qualified. The Lions won the 2013 Taiwan Series.