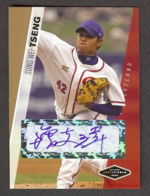 Tseng was 1-0 with a save and a 8.71 ERA for Taiwan in the 2002 World Junior Championship in which they won a Silver Medal. In the 2005 Baseball World Cup, he went 1-0 with a 2.25 ERA, beating the Spanish national team handily and taking a no-decision against Team USA. Against the US, he allowed four runs (one earned) in six innings, striking out seven. He pitched the Alaska Baseball League and Baseball America rated him the #14 prospect there. He was on Taiwan's team that won Silver in the 2005 Asian Championship.

Tseng allowed 3 hits and 2 runs in 2/3 of an inning in the 2006 World Baseball Classic. He relieved Wen-Hsiung Hsu in the 5th inning against the Japanese national team with a 6-1 deficit and the bases loaded. He immediately balked home Tomoya Satozaki. Tsuyoshi Nishioka singled home the other two runners to make it 9-1. Kosuke Fukudome reached on a fielder's choice then Nobuhiko Matsunaka singled. Tseng walked Hitoshi Tamura. Akinori Iwamura singled home Fukudome and Matsunaka for a 11-1 Japan lead but Tamura was thrown out at third to end the carnage. Chun-Chung Huang relieved Tseng.

Tseng had no decisions and a 3.38 ERA in 2006 Haarlem Baseball Week. He was signed by Cleveland Indians scout Jason Lee in July of 2006. He was an ace for the Bronze Medal-winning Taiwan entry in the 2006 Intercontinental Cup, appearing in five games and going 1-0 with a save and 1.08 ERA. He tied for the team lead with 16 2/3 IP, tied Po-Hsuan Keng for the team lead in games pitched and had their best ERA. He pitched 3 scoreless innings in the semifinals in a tough 5-4 loss to the Cuban national team. He then pitched three more scoreless frames in relief to wrap up the shutout of the Japanese national team in the Bronze medal game. He won Gold in the 2006 Asian Games.

Tseng was 6-9 with a 4.05 ERA in 2007 for the Kinston Indians in his US debut. He rejoined the national team for the 2007 Baseball World Cup and walked 5 in 2 1/3 innings in the event as the least-used pitcher on the host Taiwan team. He allowed one run.

In the 2009 World Baseball Classic, Tseng was Taiwan's best hurler. He relieved Yueh-Ping Lin in the 5th inning against China and gave up an infield hit to Fenglian Hou and a double to Ray Chang, scoring both inherited runners. He recovered to strike out Fei Feng. In the 6th, he got Chao Wang, Guangbiao Liu and Fujia Chu 1-2-3. In the 7th, he struck out both Delong Jia and Zhenwang Zhang and was then relieved by Fu-Te Ni.

Tseng struggled for the '09 AZL Indians with 10 hits, 11 walks and 13 runs in 6 2/3 IP, somehow going 1-1. He was let go in spring training the next year and could not find a home in Organized Baseball that season.