The 2012 Italian Series was won by T&A San Marino, their second consecutive scudetto and third title in five years. The Series MVP was Francesco Imperiali, who hit a 3-run homer in the finale, then delivered the winning double in the bottom of the 9th. San Marino beat Rimini, 4 games to 2. 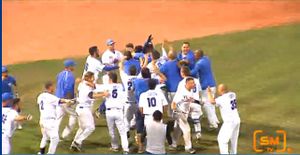 In the 8th, Rimini pulled ahead. With one out, 2B Joe Persichina hit into an error by Bittar. Persichina advanced on a fly out. That brought up DH Max De Biase and the Argentinian singled in Persichina. Angrisano singled as well, as did LF Riccardo Suardi to tie the game. 1B Giuseppe Spinelli then cracked a 2-run double, one of 3 hits for himself on the day, to put Rimini ahead 5-3 and knock out Cubillan in favor of Yulman Ribeiro.

In the bottom of the 9th, San Marino rallied for the home crowd. Against former major leaguer Francisco Cruceta, Ramos singled. Mazzuca struck out but RF Laidel Chapellí singled. 2B Francesco Imperiali drew an intentional walk to load the bases. Mark DiFelice, another ex-major leaguer, relieved Cruceta. He provided no relief whatsoever, as 1B Giovanni Pantaleoni greeted him with a 2-run single to tie it at 5. Marco Yepez (2010 Italian Series MVP) then pinch-hit for C Simone Albanese and clobbered a 3-run homer to end the game.

In the 4th, San Marino began their comeback against Roberto Corradini. Mazzuca hit a one-out double; an out later, 2B Francesco Imperiali singled him in. In the fifth, San Marino took the lead. SS Daniel Bittar and LF Lorenzo Avagnina hit back-to-back singles. CF Carlos Duran hit into an error by Santora, scoring Bittar. After a passed ball by C Juan Pablo Angrisano, DH Jairo Ramos Gizzi hit a sacrifice fly to make it 3-2. 1B Marco Yepez then singled in Duran.

Rimini closed the gap to one in the 7th when Da Silva plunked Angrisano and 1B Giuseppe Spinelli hit a one-out RBI double. In the 8th, though, San Marino built their lead further. Imperiali led off with a double off Carlos Pezzullo. Sandy Patrone relieved but did not fare well. C Simone Albanese greeted him with a bunt single. Bittar grounded to Sahntora, who threw home to retire Imperiali. Avagnina, who already had 3 hits, reached on a force at second. Duran then slammed a 3-run homer to put it out of reach, 7-3.

In the bottom of the 6th, Rimini finally got to Rodney Rodriguez as RF Mario Chiarini and DH Max De Biase hit back-to-back singles. Darwin Cubillan relieved but served up a 2-run double to LF Riccardo Suardi with one out to tie it. Things remained deadlocked until the bottom of the 11th. Rimini C Juan Pablo Angrisano hit into an error by SS Daniel Bittar. Suardi singled and Yulman Ribeiro relieved Cubillan. 1B Giuseppe Spinelli bunted into an error by 1B Marco Yepez, then CF Filippo Crociati hit a grounder to Santora, who threw home to get Angrisano. SS Jack Santora singled in Suardi to keep Rimini's hopes alive.

Rimini went ahead for good in the bottom of the opening inning against Chris Cooper. SS Jack Santora singled and RF Mario Chiarini walked. 2B Joe Persichina bunted into an error by 3B Joe Mazzuca. After an out, DH Max De Biase slugged a 3-run homer. De Biase would finish 2 for 2 with two walks and the 3 RBI, while Chiarini would score 3 times in the win.

Rimini came close to scoring in the second off Tiago Da Silva. DH Max De Biase led off with a double and C Juan Pablo Angrisano singled in a series of at-bats featuring two Argentinians against a Brazilian, some of the best South America (outside Venezuela) had to offer baseball in 2012. LF Riccardo Suardi grounded to 3B Joe Mazzuca, who threw home to get De Biase. Suardi was then caught stealing by C Simone Albanese to end that threat.

In the bottom of the second, San Marino got to work against Roberto Corradini. RF Carlos Duran singled. With one out, 40-year-old CF Laidel Chapellí did the same. After a passed ball by Angrisano, Imperiali smacked a 3-run homer. They got insurance in the 6th. 1B Marco Yepez singled, knocking out Corradini. Carlos Pezzullo relieved and allowed a single to DH Jairo Ramos Gizzi, sending Yepez to third. Duran then hit a sacrifice fly for a 4-0 lead.

Rimini tied it with a big 7th. Angrisano grounded into an error by Mazzuca, then the next three batters (hitters 7 through 9 in the order) singled: Suardi, 1B Giuseppe Spinelli and CF Brandon Chaves. That makde it 4-2. SS Jack Santora bunted the runners over, then 2B Joe Persichina hit a 2-run single to right to tie the game. Despite the rally, San Marino struck with Da Silva, who allowed no more runs. For the day, he gave up 12 hits, 3 of them to RF Mario Chiarini.

With the game still even at four in the bottom of the 9th, Chapellí singled off Pezzullo. Sandy Patrone was summoned from the bullpen, but the move backfired when Imperiali greeted him with a RBI double to end the Series.