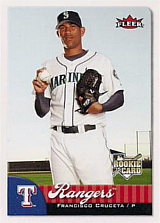 Francisco Cruceta was signed by scout Pablo Peguero for the Los Angeles Dodgers in May 1999. He pitched parts of three non-consecutive seasons in the big leagues, all in the American League. Making 19 appearances split among the Cleveland Indians, Seattle Mariners and Detroit Tigers, he was 0-4, 7.96 in 26 innings.

Cruceta was 1-0 with a 1.69 ERA for the Aguilas Cibaeñas in the 2008 Caribbean Series. He signed with the Samsung Lions for 2009 and debuted on April 7, allowing 5 hits and 4 runs in 3 innings against the Seoul Heroes. For the season, he went 9-10 with a 4.36 ERA; he walked a frightening 109 in 157 innings. He tied for 7th in the KBO in losses and easily led in walks, 28 ahead of Hyo-joon Ko. In 2010, he fell to 6-10, 5.25, tying fellow imports Aquilino Lopez and Adrian Burnside for 6th in defeats. Cruceta was with the Dominican Republic national team in the fall of 2011. In the Baseball World Cup, he was the country's best reliever and joined Mario Álvarez in leading the staff. In 5 innings, he allowed only one hit. He tossed blemishless relief in losses to both Cuba (1 1/3 innings) and South Korea (1 2/3 innings) and gave up only a Rodolfo Cardona single in two innings of a loss to Venezuela, fanning 3. In the Pan American Games, he again dazzled in relief in a game his team lost, striking out six in four shutout innings after replacing Runelvys Hernandez in a 3-2 loss to host Mexico. He then got the win in a slugfest over Venezuela. Overall, he led the team with 5 shutout innings in the Pan Am Games and also paced them with 8 strikeouts. Cruceta signed to play in the Italian Baseball League in 2012, debuting on March 30 with a start for Telemarket Rimini in their season opener. He had a great game, fanning 11 in 6 1/3 innings while allowing 3 hits, no walks and no runs. Marcos Tabata relieved and blew the shutout but Cruceta wound up the win in a 4-2 victory.