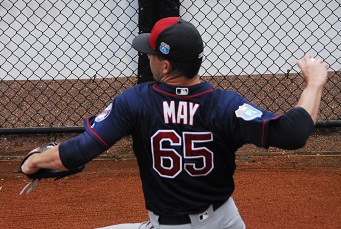 Pitcher Trevor May reached the majors in 2014.

He was selected by the Philadelphia Phillies in the fourth round of the 2008 amateur draft after being scouted by Dave Ryles. He was picked between Jason Kipnis and Ethan Hollingsworth. He made his pro debut that summer with the GCL Phillies, going 1-1 with a 3.75 ERA. With the 2009 Lakewood BlueClaws, the Washington native turned in a 4-1, 2.56 campaign with 95 strikeouts and a .211 opponent average but 43 walks in 77 1/3 IP. In the postseason, he struck out 11 in 11 innings and allowed no earned runs. Baseball America rated him as the 19th-best prospect in the South Atlantic League, between Alex Perez and Melky Mesa.

He went 10-8 with a 3.63 ERA in 27 starts for the Clearwater Threshers in 2011, allowing a .221 average and striking out 208 in 151 1/3 IP. He was the winning pitcher in the 50th FSL All-Star Game. He tied for 7th in the FSL in wins, led in shutouts (2), was third in innings pitched (between Julio Rodriguez and Nick Bucci), was third in walks (between Rob Rasmussen and Jared Wesson) and easily led in strikeouts (40 more than Rodriguez). He struck out more batters than any Phillies farmhand in at least 30 years and was named Philadelphia's Minor League Pitcher of the Year. Baseball America named him the Phillies' top prospect and the #4 prospect (behind Shelby Miller, Matt Harvey and Hak-ju Lee).

He posted a 10-13 record for the Reading Phillies in 2012, with a 4.87 ERA, 22 homers allowed, 78 walks and 151 strikeouts in 149 2/3 IP. He finished among the Eastern League leaders in wins (tied for 8th), losses (tied for second with James Avery, behind Deck McGuire), homers allowed (22, tied for first with McGuire and Logan Darnell), walks (1st, 2 more than Rodriguez) and strikeouts (1st by 14). In the Philadelphia system, he tied for 4th in wins, led in losses, led in walks, was second to Hyatt in homers allowed and tied Jesse Biddle for second in strikeouts (behind Adam Morgan). With such a poor performance, he did not make the Baseball America list of the top 20 EL prospects, despite his leading strikeout total.