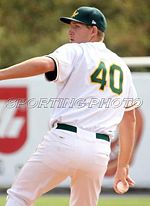 Drew Naylor led his league in strikeouts his second pro season. Naylor is the son of Geoff Naylor, a former professional rugby player.

In 2007, Naylor tossed four hitless, scoreless innings but walked 3 in his lone appearance for the Rams in the Claxton Shield. He then starred for the Williamsport Crosscutters, going 8-6 with a 3.28 ERA. He led the New York-Penn League in innings (93 1/3) and strikeouts (97) and tied Guillermo Moscoso for the most complete games (2). Naylor was 9th in the NYPL in ERA. Drew pitched for the North Shore Honu in the fall, going 0-1 with a save and a 7.30 ERA but striking out 19 in 12 1/3 innings.

Drew made Australia's roster for the 2009 World Baseball Classic. He pitched one game, entering in the 6th against Mexico with a 12-1 deficit. He gave up a double to Adrián González, got an out, then walked Scott Hairston. Jorge Vázquez hit a ground-rule double and Nayloe was replaced by Adam Bright, who let both inherited runners score.