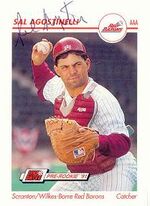 Sal Agostinelli is a former minor league baseball catcher who played from 1983 to 1991 in the St. Louis Cardinals and Philadelphia Phillies farm systems. He was notoriously powerless, hitting only three home runs over nine minor league seasons. On top of that, he hit only 63 extra base hits - less than 10 a year. Throughout his career, he had a terrific eye at the plate, only once striking out more than walking in a season.

Drafted by the Cardinals in the 22nd round of the 1983 amateur draft, Agostinelli started his professional career that same year. He split time between the Johnson City Cardinals and Erie Cardinals, hitting .247 with one home run in 162 at-bats. He walked 27 times and struck out only five times - a ratio of over 5:1.

He split time between the St. Petersburg Cardinals and Arkansas Travelers in 1986, hitting .296 combined. With the Cardinals alone he hit .374 in 99 at-bats. Overall, he walked 22 times and struck out 16 times.

In 1987, he played every single one of his games save for one with the Travelers. He played in one game with the Louisville Redbirds, and 84 with the Travelers. Overall that year, he hit .241 with 25 runs scored, 20 RBI and 24 walks and 18 strikeouts. He also hit the second home run of his professional career that year.

In an unknown transaction, he found his way into the Phillies farm system.

Between the Reading Phillies and Scranton/Wilkes-Barre Red Barons in 1990, Agostinelli played in 76 games, hitting a combined .194. He scored 12 times, drove in 15 runs, walked 22 times and struck out 20 times.

He played his final season in pro ball in 1991. He split time with the Clearwater Phillies, Reading, and Scranton/Wilkes-Barre, and combined he hit .226 with 13 runs, 11 RBI, 20 walks and 21 strikeouts.

In 1991, he began his coaching career. In 1992, he coached for Reading. In 1993, he was promoted to Northeast Scouting Supervisor of the Phillies. Agostinelli became the international scouting director for the Philadelphia Phillies in 1997 and he has started up Sal Agostinelli’s Long Island Baseball Academy. [1]