Home of the Toronto Blue Jays, 1989 to present 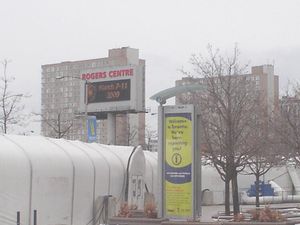 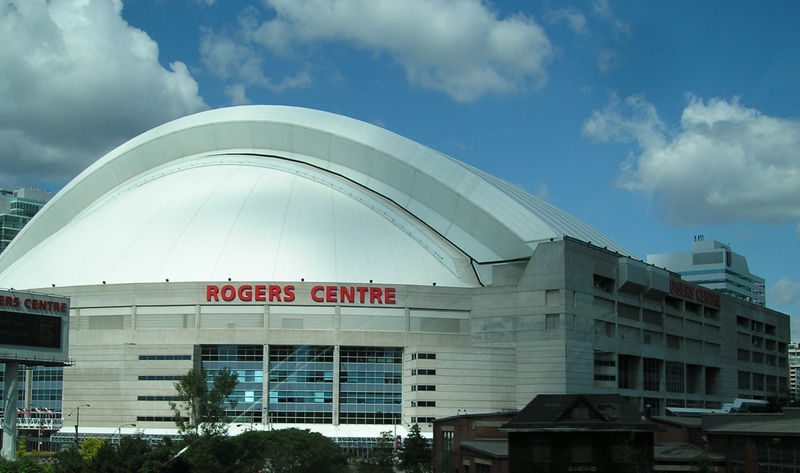 The Rogers Centre, home of the Toronto Blue Jays, began life in 1989 as the SkyDome, before the beginning of the trend of selling corporate naming rights to stadiums. It was designed by architect Roderick Robbie of Toronto, ON, one of Canada's leading modernist architects, who was most famous for designing the innovative Canadian Pavilion at Expo '67 in Montreal, QC. It has been called the Rogers Centre since the 2005 season.

The SkyDome was the first ballpark with a working retractable roof. Stade Olympique in Montreal had been conceived to have a retractable roof, but that feature did not become operational until after SkyDome opened, and never worked particularly well anyway. SkyDome's design was highly innovative, both because of the roof and also because it integrated elements of the city scape into the ballpark, such as a hotel in which many rooms offered a view of the playing field. With its downtown location, large concourses, and numerous concession areas, it was a forerunner of many of the trends that would dominate the great wave of ballpark construction in the 1990s and 2000s. However, it also had a number of features which were about to go out of style, such as a multi-purpose playing surface that could also be configured for use by the Toronto Argonauts of the Canadian Football league or for soccer games, and artificial turf. When Camden Yards opened two years later in Baltimore, MD, inaugurating the "retro" look and the baseball-only, natural grass stadium trend, SkyDome instantly appeared dated. Yet, it was tremendously influential in demonstrating that a retractable roof was both feasible and operationally possible, but also in integrating neighboring buildings into its architecture.

Because of the pioneering nature of its design, the SkyDome was much more expensive to build than had been anticipated, leading to acrimony between the architect's firm and the City of Toronto. This was quickly forgotten when the Blue Jays began a period of tremendous success shortly after moving into their new building in mid-1989. They won an AL East Division title that year, and again in 1991, then back-to-back World Series titles in 1992 and 1993. In 1991, the Jays were the first team to attract 4 million fans to their games, and they repeated that figure the next two seasons. The 1994 strike had a huge negative impact on attendance however, and the Jays did not top 3 million again until 2016. Inded, from 1998 to 2012, they were below 2.5 million each year.

The ballpark tends to favor hitters over pitchers, but only slightly, with a park factor of 104 which ranked it 11th among 30 major league parks in 2010. Because it is largely enclosed, wind and cold are not as significant a factor as they usually are for ballparks in northern climates, and the ball tends to travel well, especially with the roof closed, favoring home run hitters. The most famous baseball moment in SkyDome history is Game 6 of the 1993 World Series, when Joe Carter hit a three-run walk-off home run off the Philadelphia Phillies' Mitch Williams to give the Jays their second World Championship. The SkyDome was the site of the 1991 All-Star Game, won 4-2 by the American League squad. It has also hosted first-round games of the World Baseball Classic in 2009.

Rogers Centre was one of the last two major league ballparks to still use artificial turf - the other being Tropicana Field - as many of the parks opened in the 1970s were taken out of commission during the 2000s. In 2015, the Blue Jays installed a new turf which quickly became notorious for causing all sorts of crazy bounces, and slowing down ground balls at an alarming rate, to the point that Major League Baseball was "monitoring the situation", to ensure that the new playing surface would not unduly affect the outcome of games. The team said they were confident that things would settle down when the turf became a little worn out.

In 2020, the Blue Jays were unable to use Rogers Centre except for a handful of intrasquad games during "summer camp" in early July, as the Canada-U.S. border remained closed due to the coronavirus pandemic and the Canadian Government refused to grant a special exemption for visiting teams to enter Canada given the much higher infection rates in the U.S. at the time. Instead, the Blue Jays decided to use Sahlen Field in Buffalo, NY as an alternate home base for the season after being denied their first choice of PNC Park in Pittsburgh, PA.

Since its opening in 1989 until 2015, the Rogers Centre was the home to the Canadian Football League's Toronto Argonauts. In the mid-1990s it served as the first home for the National Basketball Association's Toronto Raptors. For four seasons it was used in the short-lived International Bowl for collegiate football, and until Buffalo Bills' owner Ralph Wilson's death in 2014, was the partial home of the National Football League's Bills between 2008 and 2013.