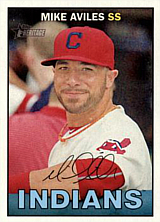 The nephew of big leaguer Ramon Aviles, Mike Avilés made his big league debut in 2008. Ramon's brother Gilberto Avilés was on the Puerto Rican national team and thus was either Mike's uncle or father.

Mike was a top star in his senior year of college, hitting .500 with 83 runs scored, 22 homers and 65 RBI in 45 games. He slugged 1.016 and led NCAA Division II in batting average. He was named the ABCA Player of the Year for Division II, an honor previously won by Tino Martinez and Brett Tomko. The American Baseball Coaches Association named him a first-team Division II All-American while Baseball America named him a small college All-American first-teamer at shortstop. He won the Baseball America Division II Player of the Year Award, but lost small college player of the year to Division III's Matt DeSalvo. He also led Division II in homers, runs and total bases (193). The Kansas City Royals took the short shortstop in the 7th round of the 2003 amateur draft. He was signed by scout Steve Connelly and made his pro debut that summer.

Avilés had an excellent pro debut, hitting .363/.404/.585 in 52 games for the AZL Royals with 51 runs scored. He led the Arizona League in runs and doubles and was 4th in average while leading AZL shortstops in putouts (82) and assists (141). He was named to the All-Star team at shortstop and MVP of the AZL, beating out slugging leader Wladimir Balentien. Mike was named the league's #13 prospect by Baseball America; the relatively low rating may have been due to his age relative to the league, which featured many players out of high school. In 2004, Avilés was bumped up to the Wilmington Blue Rocks and led Royals farmhands with 40 doubles, a Wilmington franchise record. He hit .300/.352/.443, finishing 6th in the Carolina League in average, leading in doubles, tying Shane Costa for third with 139 hits and placing third with 50 extra-base hits. He was named to the Carolina League All-Star team at shortstop while Baseball America did not feature him on their list of the league's top 20 prospects. At age 24, Mike batted .280/.318/.447 for the Wichita Wranglers with 33 doubles, 6 triples, 14 homers, 79 runs and 80 RBI. He made 33 errors, leading Texas League shortstops. He made the All-Star team at utility man as Erick Aybar was chosen at shortstop. In 2006, the New Yorker played all year at Triple A with the Omaha Royals, producing at a .264/.307/.373 clip with 14 steals in 19 tries. He played primarily third base and his 20 errors were the most in the Pacific Coast League at the hot corner.

Mike hit .296/.332/.463 for Omaha in 2007 with 27 doubles, 78 runs, 6 triples, 77 RBI and 17 homers. He played at least 33 games at second base, third base and shortstop. He grounded into 24 double plays, leading the PCL. He was named Omaha's Player of the Year and Kansas City's Minor League Player of the Year, beating out Craig Brazell, the top home run hitter in the affiliated minors. Despite his success, he did not get a call-up to the majors. In the Venezuelan Winter League, Avilés batted .299/.364/.471 for the Tigres de Aragua to finish 11th in the league in average and help Aragua get to the 2008 Caribbean Series. He began 2008 back with Omaha and was hitting .336/.370/.631 with 42 runs scored and 42 RBI in 51 games when he finally was called up to replace the struggling Billy Butler.

Avilés was immediately put in the starting lineup, with shortstop Tony Pena Jr. having even more troubles than Butler. He struck out against Kevin Slowey in his first major league at-bat and finished his first game in 0 for 3. However, he picked up the pace immediately, becoming the Royals' best hitter over the season's second half and holding the shortstop position the rest of the year. He put up a batting line of .325/.354/.480 in 102 games, with 68 runs scored and earned a place on the 2008 Topps All-Star Rookie Team. He was added to the Puerto Rican national team for the 2009 World Baseball Classic, forming a double play combination with Felipe Lopez.

Mike was traded to the Boston Red Sox midway through the 2011 season, and hit .317 in 38 games as a utility player. In 2012, he replaced Marco Scutaro as the Sox's starting shortstop, playing 136 games with a .250 average, 28 doubles and 13 homers, making him one of the more productive players on a team that struggled to a last-place finish. On October 20th, Avilés was sent to the Toronto Blue Jays in return for pitcher David Carpenter as compensation for the Red Sox signing Blue Jays' manager John Farrell with a year left on his contract. He never actually put on a Jays' uniform, as on November 3rd, he was traded again, to the Cleveland Indians, along with Yan Gomes, in return for pitcher Esmil Rogers. On June 4, 2013, he was ejected from a game against the New York Yankees after it was already over; he complained about umpire Tony Randazzo's call of a strike on a checked swing, and continued to argue as he flied out to right to end the game. Randazzo had seen enough and gave him the boot, although it was all symbolic with the Yankees already celebrating their 4-3 win. The highlight of the year for him came on September 1st, when he hit a 9th-inning grand slam off Joaquin Benoit of the Detroit Tigers to give the Indians a 4-0 win. He hit .252 with 9 homers and 46 RBI in 124 games, while splitting time between third base and shortstop.

2014 was another busy year for Mike, even though he did not have a regular job. He spent almost equal amounts of time at third, second and left, and also saw significant time at shortstop. In 113 games for Cleveland, he hit .247 with 5 homers and 39 RBI. Despite the superficially nice offensive numbers, he was actually a rather poor contributor with the bat, as it was his fourth straight season with an OBP under .300, leading to an OPS+ of only 72, similar to the previous few years. He received some terrible news in May 2015 when his four-year-old daughter Adriana was diagnosed with leukemia and had to undergo treatment at the Cleveland Clinic. Avilés took two leaves of absence to be with her and the Indians announced that they would not entertain any offers to trade him to allow him to continue playing near where she was being treated. He played 98 games, but his production continued to fall, as he hit only .231 with 5 homers and 17 RBI. His OBP was at his customary .282 for an OPS+ of only 61. All of the outside distractions may have been a factor in his poor performance. What was keeping him in the game was his ability to play multiple positions, including the outfield, a precious commodity at a time where most teams were down to three or four bench players. On December 19th, he signed a one-year deal with the Detroit Tigers. At the beginning of spring training in February 2016, he announced his daughter was now cancer-free after a bone marrow transplant in December. He played 68 games for Detroit, hitting .210 with 1 homer and 6 RBI while getting at least five starts at six different positions. On August 16th, he was traded to the Atlanta Braves, along with catching prospect Kade Scivicque, in return for shortstop Erick Aybar a move designed to open up a starting slot in Atlanta for top prospect Dansby Swanson. He was immediately designated for assignment and released on August 21. His big league time was over after five days with the Miami Marlins in 2017.