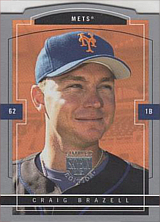 Craig Brazell was drafted by the New York Mets in the 5th round of the 1998 amateur draft. He was signed by scout Bob Rossi and made his pro debut that summer.

Brazell saw brief action with the Mets in 2004, mashing his lone big league homer, a walk off shot, off LaTroy Hawkins of the Chicago Cubs to make the Metsies 4-3 victors on September 25. He became a minor league journeyman, moving to the Los Angeles Dodgers and Kansas City Royals organizations over the next few years. In 2007, he hit a total of 39 home runs to lead the affiliated minors; 7 for the AA Wichita Wranglers and 32 for the AAA Omaha Royals. For the minor league year, he batted .315, slugged .601 and drove in 91 runs. He was named Topps Pacific Coast League Player of the Month for May. Craig was recalled to the bigs on September 3rd by the Kansas City Royals and logged his last big league time that season. For leading the affiliated minors in homers, he won the Round-Tripper Award, which included a check for $7,800: $200 per homer. He also was honored with the Joe Bauman Home Run Award.

Brazell was signed by the Seibu Lions in December 2007, inking a one-year deal. It was hoped that he would fill the gap left by departing slugger Alex Cabrera. He ultimately spent parts of seven seasons in Nippon Professional Baseball, from 2008 to 2014, slugging 126 home runs to the tune of a .269/.313/.484 slash line (670 games) with time with Seibu, the Hanshin Tigers and the Chiba Lotte Marines. He retired following the 2014 season.

Craig's father, Ted, played and managed in the Detroit Tigers minor league system from 1970 to 1983.