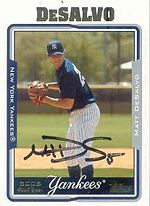 Pitcher Matt DeSalvo was one of the greatest pitchers in NCAA Division III history. He debuted in the majors in 2007.

Matt graduated college with a degree in environmental science but went undrafted. He had a dazzling five-year career in NCAA Division III (he was redshirted one year) and set NCAA Division III records for career wins (53) and strikeouts (603). As a senior in 2003 , he went 13-2 with one save and a 1.31 ERA and led the Division with 157 strikeouts in 96 IP, allowing only 46 hits. He was an ABCA All-American for the third time, won the ABCA Player of the Year Award for Division III and was picked as the Baseball America Small College Player of the Year and as a Small College All-American.

DeSalvo was signed by scout Mike Gibbons for the New York Yankees as an undrafted free agent in May 2003. At the time, DeSalvo was still working on a circle change which would later be cited as his best pitch. The first time he had thrown it was in a Division III College World Series game - he hit the batter. He would be the second ABCA Player of the Year from Division III to make the majors, following Eric Owens.

In 2005, DeSalvo was named the Yankees Minor League Pitcher of the Year, beating out top prospect Philip Hughes among others. He was 9-5 with a 3.02 ERA for Trenton, allowing a .202 average and striking out 151 in 149 IP. He finished third in the Eastern League in ERA, trailing Jon Lester and Yusmeiro Petit. He failed to make the EL All-Star team as Joel Zumaya was selected as the top right-handed starter.

DeSalvo rediscovered the joy of baseball while playing whiffle ball with old friends in the off-season after 2006. The Yankees waived Matt that year but no one claimed him.

DeSalvo went 3-0 with a 1.05 ERA to begin 2007 with the Scranton/Wilkes-Barre Yankees, allowing 15 hits in 25 2/3 IP. With the 2007 Yankees struggling for help, he was called up to replace a struggling Kei Igawa. He made his major league debut by starting a May 7th game against the Seattle Mariners and giving up just 3 hits in 7 innings. He went 1-3 with a 5.87 ERA in 6 games before being sent back down. He helped the Yanks become the first team in MLB history to use 10 starters in the first 30 games of the season, joining Igawa, Chase Wright, Hughes, Andy Pettitte, Darrell Rasner, Chien-Ming Wang, Mike Mussina, Carl Pavano and Jeff Karstens.