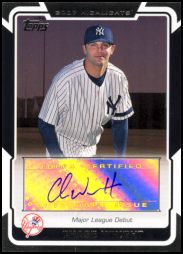 Pitcher Chase Wright worked six years in rookie ball and A ball before suddenly getting his shot at the majors when several 2007 Yankees pitchers were injured. He promptly was involved in records in each of his first two starts.

Wright was picked by the New York Yankees in the third round of the 2001 amateur draft, the Yankees' 6th pick of the draft. He was signed for a $400,000 bonus.

Wright debuted professionally with the 2001 GCL Yankees, going 2-3 with a 7.92 ERA. Opponents hit .317 and he walked 21 in 25 innings, though he did strike out 33. Returning to the team in 2002, Wright improved to 2-3, 3.43. His opponent batting average fell 100 points but control remained an issue as he walked 39 in 42 innings pitched, leading the Gulf Coast League in bases on balls allowed.

In 2006, he was named the Florida State League's Most Valuable Pitcher, thanks to 12-3, 1.88 season with the Tampa Yankees. He was moved from the bullpen to the starting rotation in mid-season. He made the FSL All-Star team and led the league in ERA, 1.37 ahead of runner-up Salvador Aguilar. Opponents hit .210 and he struck out 100 in 120 innings. Kevin Slowey had a 1.01 ERA in the FSL but was called up before he reached the IP qualifier. Overall, Wright tied Slowey for third in the US-based affiliated minors in ERA, ahead of #5 Matt Garza.

Wright started 2007 in dominating form. In his AA debut, he shut out the Bowie Baysox for 7 innings, striking out 9 and allowing 3 hits and no walks on April 5. Six days later, he allowed one hit and one walk in 7 scoreless innings, whiffing 10 against the Harrisburg Senators.

With Mike Mussina, Chien-Ming Wang and Carl Pavano injured, the Yankees called up the southpaw. He won his Major League Debut on April 17, 2007 against Cleveland, allowing three runs in 5 innings of work. It was part of a record-setting string as Kei Igawa and Sean Henn won the next two games. Never before in MLB history had a team swept a three-game series with a pitcher winning his first career major league game each contest.

Wright's second game also was record-setting, but in a way Chase would probably like to forget. He gave up consecutive home runs to Manny Ramirez, J.D. Drew, Mike Lowell and Jason Varitek, tying the record for home runs allowed in an inning. In MLB history, the only prior pitcher to allow four consecutive homers in an inning was Paul Foytack of the 1963 Angels.

When Hideki Matsui came off the DL, Wright was sent back to Trenton. Philip Hughes took his spot in the rotation, making the 2007 Yankees the first team in 52 years to give three starting pitchers their MLB debut in the season's first 20 games (Igawa was the third of the batch).