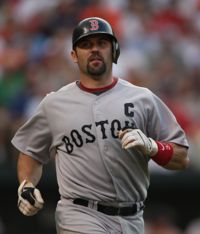 Jason Varitek competed in the 1984 Little League World Series, going 0 for 3 with an error as the shortstop and #5 hitter for Altamonte Springs, FL in their loss in the finale to Seoul. He represented the United States in the 1992 Barcelona Olympics.

The Boston Red Sox acquired him along with Derek Lowe for Heathcliff Slocumb in possibly the best move made by then Red Sox GM Dan Duquette and arguably the worst trade in Seattle Mariners history.

Varitek caught four no-hitters, tying the record held by Ray Schalk; Varitek was the first catcher to have caught four "official" ones as one of Schalk's was removed from the record books. Varitek was behind the plate for no-nos by Hideo Nomo, Derek Lowe, Clay Buchholz and Jon Lester, all between 2001 and 2008. Carlos Ruiz has since matched that feat.

He announced his retirement at a press conference in Fort Myers, FL on March 1, 2012. He had become a free agent after being mostly a back-up with the Red Sox the previous two seasons, and at age 40, his services were no longer of interest to teams. He had played his entire 15-season career with Boston. On July 21st that year, the Red Sox staged festivities before their game with the Toronto Blue Jays to honor him, in the for of a "Thanks, Tek" night at Fenway Park. In September, he joined the team's front office as a special assistant to GM Ben Cherington, although there was speculation that his future job may well be taking over for embattled manager Bobby Valentine. That did not happen, however, as the Red Sox ended up bringing back former pitching coach John Farrell as their manager when Valentine was fired, as expected.

He did make it to the on-field staff of the Red Sox in 2021 when he was named Game Planning Coordinator.

He appeared in the movie Fever Pitch as himself.